Running for a Colorful Cause 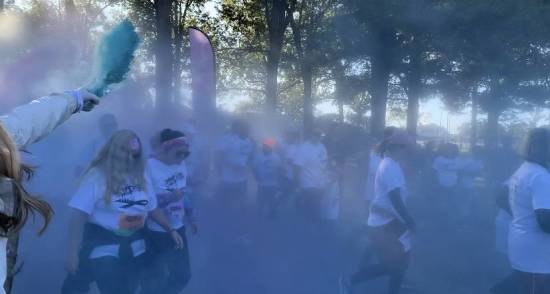 “Who would you run for?”

Development Coordinator of St. Franicis Ashley Gentry asked this of everyone around the Cape Girardeau region this past weekend.

The question was answered by those cancer survivors and supporters who turned out Oct. 12 at Arena Park for the first Color Dash to benefit Pink Up Cape, an annual awareness campaign by St. Francis Medical Center focused on highlighting the top cancers in the region: breast, prostrate, lung and colon cancers.

Gentry, a breast cancer survivor, decided to put on a Color Run in honor of those who have survived or are still fighting cancer. The Fitness Plus employees volunteered to throw the colors throughout the race and helped sponsor it.

“This is year one for us and two hundred people registered,” Gentry said. “That is huge for a 5k in this area.”

She said the turn-out made her enthusiastic events like this will continue to be a growing success. The Pink Up Cape program provides men and women with free screenings for breast, prostate, lung and colon cancers.

“This month’s Pink Up is not just about breast cancer,” Gentry said, “but events that promote money for it allow us to take the [Mammary-Van] to areas that do not host screenings and do the proper inspection.”

For example, Gentry said ever since events such as the Dig for Life have been around, the Mam-Van has been able to reach more than 300 breast cancer screenings. This has allowed patients to be screened in places where free screenings are not offered and would otherwise not have had access to proper prevention care.

That number does not include the free colon and lung screenings offered at St. Francis Medical Center.

“In order to give those free screenings, we host events like this to raise enough money for those who otherwise could not get them,” Gentry said.

Over 200 participants of families, friends and colleagues all gathered at the Conservation Pavillion in Arena Park to begin their 5k at 9 a.m. Even one of the lead managers, Sandra Duncan was taken back.

“I’m usually the race director for all of our 5Ks,” Duncan said. “But this one was put on by the Foundation to raise money for cancer screenings.”

Duncan mentioned having more than 200 participants pre-register for a race is hard to come by in Cape Girardeau. But she believes everyone wanted to come out and share the importance of cancer screenings at an event like this, and how vital it is for one’s journey.

The next race Fitness Plus will put on will be the Jingle Bell Run/ Walk for Arthritis to kick off the holidays in a festive and healthy style. Proceeds from the race will be given to the Arthritis Foundation.