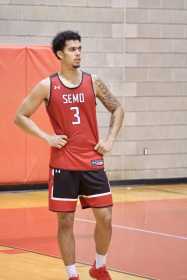 Senior guard Skyler Hogan rests during a scrimmage at the Southeast Rec Center on Oct. 18. Hogan is one of two seniors on the 2018 - 2019 team along with forward Quatarrius Wilson.
Photo by Ramond Buck

Transfers were the story of the offseason for the Southeast men’s basketball team. With now-junior guard Ledarrius Brewer, who led the team in scoring last season with 12.5 points per game; and now-sophomore forward Gabe McGlothan, a versatile defender who had 20 steals and 20 blocks, transferring out; the Redhawks brought in junior guard Nana Akenten from the University of Nebraska.

Southeast returns eight players from the 2018-19 team who went 10-21 overall and 5-13 in the Ohio Valley Conference. Of the eight returning players, two did not play last season. Freshman guard Jordan Love was redshirted, which gives him a fifth year of eligibility. Senior forward Quattarius Wilson sat out during the 2018-19 season per NCAA rule as he transferred from McNeese State to Southeast.

Wilson averaged a double-double in his sophomore season with McNeese State, averaging 10.9 points and 10.2 rebounds per game.

Wilson should help bolster the rebounding of Southeast as they ranked 11th out of 12 teams in the OVC in offensive rebounds, with 9.2 per game and fifth in defensive rebounds with 25.7 per game.

“We expect for him to come in and be a force for us rebounding the basketball both on the offensive end and the defensive end,” Southeast head coach Rick Ray said of Wilson. “Nobody ever said, ‘Hey man you gotta chill out; you’re getting way too many rebounds.’ It’s the one thing you can’t do too much of.”

The Redhawks finished 11th in the OVC and Tennessee Tech was the only team below the Redhawks. The Golden Eagles finished 4-14 in OVC play.

Ray said one of the biggest things the team needs to improve on from last year is players learning to accept their roles.

Ray said that there are no set starters coming into the beginning of the season.

“We can’t have any preconceived notions of who’s starters and who’s coming back, because it’s a totally different team,” Ray said.

Hogan said in the offseason he worked in the gym with his teammates to prepare for the upcoming season.

“It was more about getting other guys in the gym to get extra work in and just bringing us together for our chemistry,” Hogan said.

Gable started in 24 games for the Redhawks and led the team in 3-pointers made with 51.

With Hogan and Wilson being the only two seniors on the roster, Hogan said they try to keep the intensity high during every practice.

“We bring energy everyday because the most important thing to us is playing hard,” Hogan said.

One player on Southeast’s roster that has experience playing against Power Five schools is Akenten.

Ray said he likes the addition of Akenten and thinks he will bring a lot to the table for this Redhawks team.

“The number one thing we talked about was [his] athleticism. The second thing is his ability to make shots,” Ray said.

Hogan said some values the team focuses on the most are having a good interior defense and good ball distribution on offense.

“Defensively our values are [to] keep the other team out of the paint and make them take contested jump shots and offensively share the ball. Everybody can contribute, we have enough pieces,” Hogan said.

Southeast will open the 2019-20 campaign Nov. 6 when they travel to Nashville, Tennessee, to play Vanderbilt University, a member of the always-competitive Southeastern Conference.