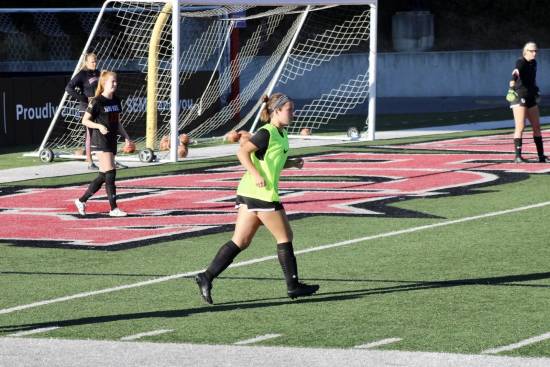 Southeast freshman forward Hailey Block has become an indispensable player for the Redhawks soccer team in the 2019 season. She leads the team in goals with five, four of which have come in Ohio Valley Conference play.

Block played soccer since she was six years old. The connections and relationships she has made throughout her career have helped her fall in love with the game.

Recognition of Block’s play began in high school as she became the all-time leading scorer in Grafton High School history with 94 goals. Block was named the Journal Sentinel Player of the Year and earned First-Team All-State and All-Conference honors as a senior.

“I have always enjoyed and loved soccer and the connections I made with teammates and coaches,” Block said.

Block’s favorite memory so far in her career as a Redhawk was her first goal against Southern Illinois University-Edwardsville.

“I remember getting a ton of hugs from everyone,” Block said. “I was so happy and everyone else’s faces lit up and they all ran to me.”

Block, from Grafton, Wisconsin, is roughly seven hours from her hometown. The “home atmosphere” at Southeast helped Block decide to commit, along with the welcoming coaching staff.

“The coaches approached me and were super welcoming and nice,” Block said. “I could tell they cared for me as a person rather than just a soccer player.”

Southeast coach Heather Nelson and the rest of the coaching staff were very excited about Block’s commitment to the program. The role Block has played in recent games has changed from the vision the coaches had for her during the recruitment process.

“What has changed is the position that she is playing for us,” Nelson said. “When we recruited her we thought that she was going to primarily be a central midfielder.”

Because of some injuries that have occurred on the team throughout the season, Block was moved to the striker position.

“We had a few injuries and she was one of the players who we decided that we would put up top, and she has excelled there,” Nelson said.

“It was new for me in adjusting, but the coaches saw strengths in me that I never noticed before, so it’s good that that outlet was there to help me be more creative moving forward,” Block said.

Block was ahead of the game as she came into preseason fit and ready to go. Being a coachable player has helped Block mesh with the team.

“When you ask her to change things or tactically view things a little bit differently, she's always on board for whatever the team needs,” Nelson said.

In Block’s eyes, the different personalities on the team help the players learn about each other off the field.

“There are a ton of different personalities on the team, and I think that’s what helps us come together and connect with one another and learn about each other in different ways besides the soccer part,” Block said.

From a coach’s viewpoint, Block works very well with the players in the program. Nelson has a vision, as of right now, to keep Block in the striker position for the next three years.

“From a team perspective, from what I see, she leads by example and the program can never have too many players that lead by example,” Nelson said. “I don’t see that changing in her. I hope she continues to fall more in love with our program and our soccer family and we continue to bring out the best in her.”

The Redhawks have three OVC games remaining and will return home to play Jacksonville State University on Friday, Oct. 25 at Houck Field.