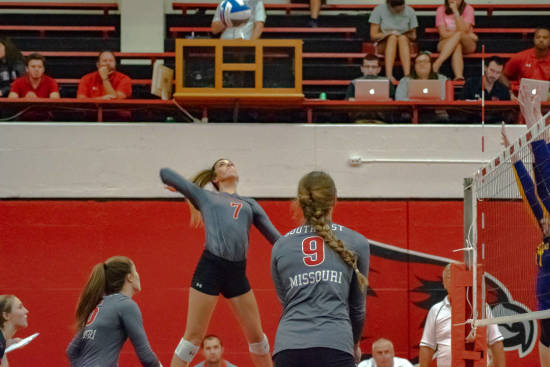 Junior outside hitter Laney Malloy (middle) rises up for a spike in a match against Western Illinois on Sept. 6 at Houck Field House.
Photo by Jelani Days

Junior outside hitter Laney Malloy has been an integral part of the Southeast volleyball team since transferring from the University of Illinois-Chicago after her freshman year. Malloy led Southeast in kills during the 2018 season with 299 and currently leads the team in kills this season with 234 through 20 games.

Malloy said she transferred from UIC because it “wasn’t the right fit for her.” She credits junior defensive specialist for the Redhawks, Ally Dion, against whom she played club volleyball, for reaching out to her while she was looking for other schools.

“She had reached out to me saying how she really liked this school, and I trusted her because I’ve known her for a while,” Malloy said.

Malloy said one of the things that stood out about Southeast was the team aspect.

“At my other school, I just didn’t like the team part of it. Looking at schools this time around I wanted to make sure I was with people [who] I enjoyed playing with every day, and I wanted to be surrounded by supportive people who like hanging out as a group instead of being so ‘clique-y’,” Malloy said.

Once she selected Southeast, Malloy said she felt welcomed by fellow juniors Maggie Adams and Dion.

“When I did come visit here, I really just fit in right away, especially with my class, with Maggie and Ally, they were super welcoming,” Malloy said.

“Sometimes it’s hard to take a chance on transfers,” Malloy said. “She’s always supported me and given me the confidence that I need in order to be the best I can right now.”

In her childhood years, Malloy was always around the game of volleyball because her mom, Maia Malloy, played collegiate volleyball at Washington State.

“I kind of grew up around volleyball, so I started playing when I was in fourth grade and [my mom] was my coach from fifth grade through eighth grade, and I just kind of took off from there,” Malloy said. “I definitely credit her to where I’m at now because when I was in fifth and sixth grade I was always complaining that I didn’t want to play but she taught me to never quit,”

Malloy said playing club volleyball her freshman year of high school made her realize she could play at the next level.

“A lot of college coaches would be coming to our games because we had so much talent on our team,” Malloy said. “It got me that exposure and that’s when I realized if I keep this up for four more years I have the potential to play in college.”

Malloy said the realization she could play in college only motivated her to work harder.

“It motivated me because I wasn’t the best on that really good team,” Malloy said. “I was surrounded by people that were a lot better than me, and I saw that they were getting noticed by all these bigger schools so that motivated me to keep pushing and work even harder.”

Malloy said one of the players skilled at anticipating her moves and setting her up is sophomore setter Claire Ochs.

“We just have that hitter-setter relationship,” Malloy said. “We always vibed, and I really like her game so we kind of feed off of each other on the court, and we’re also good friends off the court too.”

Off the court, Malloy said the team does a lot of things together and they all get along well.

“If we’re staying at a hotel I don’t care who I stay with because I get along with everyone on the team,” Malloy said. “My closest friends would be the two other juniors, Maggie [Adams] and Ally [Dion] and then Claire [Ochs] and Liss,” Malloy said, referring to sophomore Elissa Moylan.

Malloy and the Redhawks are back in action Oct. 25 when they hit the road to play Tennessee State.