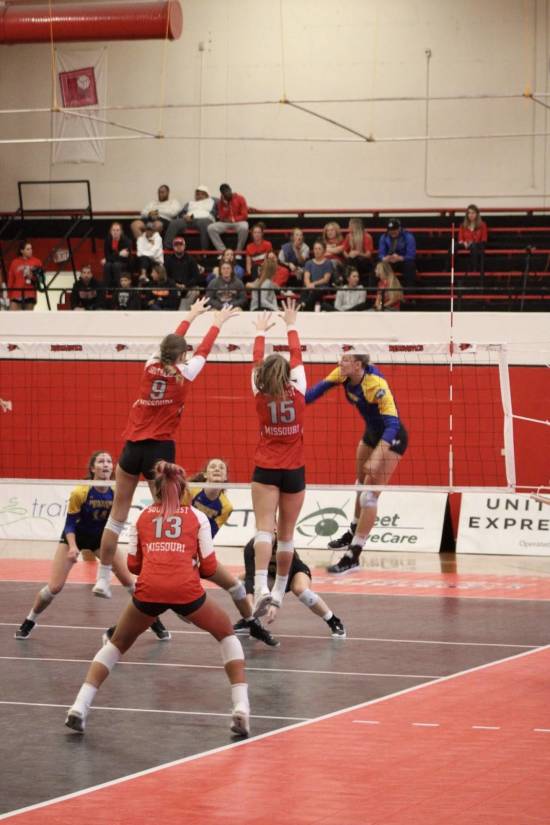 Senior Krista Berns (#9) and sophomore Claire Ochs (#15) go up for a block against Morehead State on Oct. 18 at Houck Field House.
Photo by Ramond Buck

It took just six sets for Redhawks volleyball to go 2-0 on the weekend.

Southeast rallied behind a balanced attack in their straight-set win over Eastern Kentucky. Junior middle blocker Maggie Adams had eight kills and three blocks to pace Southeast. Adams attributes her success to her teammates.

“I think the team’s energy was really good, and we worked together well,” Adams said.

The Redhawks passing game got off to a slow start in the first set against Eastern Kentucky, but Southeast head coach Julie Yankus was pleased with how her team responded.

“We just had to get back to the basics,” Yankus said. “Our technique wasn’t there, we were kind of rushing through our skills.”

Adams said in the huddle the team knew they needed to raise their level of play.

“We came together and realized we just needed to lift our level of play and just keep going, and we did that,” Adams said.

Sophomore setter Claire Ochs had a match-high of 34 assists to bring her total to 773 on the season in the win over Eastern Kentucky.

Yankus had high praise for Ochs following the win over Eastern Kentucky.

“I believe she’s the most athletic setter of the conference,” Yankus said. “She’s an athlete, a competitor, a leader and having those characteristics in your setter who’s somebody who gets the ball all the time, she truly determines a lot of what’s happening with our team.”

Senior middle blocker Krista Berns had a big part in the Redhawks’ win over Eastern Kentucky as she posted a team-high nine kills in the victory. Malloy posted eight kills in the win, as well.

Yankus credited Ochs for getting everyone involved in the win over Eastern Kentucky.

“Claire did a great job of running the offense and getting everybody involved,” Yankus said. “The fact that we are in system so much allows our middles to get a lot more opportunities and get good opportunities, so for our middles to hit the way they did, they were very efficient.”

The weekend victories helped improve the Redhawks to 14-8 overall and 6-2 in the Ohio Valley Conference.

The Redhawks will be back in action at 6 p.m. Oct. 25 when they travel to Tennessee State.