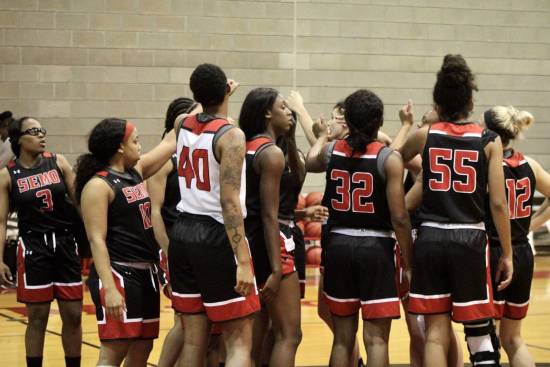 The Southeast women’s basketball team huddles up during practice on Oct. 18 at the Southeast Rec Center.
Photo by Ramond Buck

Tipoff is just around the corner as the Southeast women’s basketball team gears up for the 2019-20 season.

The Redhawks are coming off a season in which they finished 13-17 overall and 8-10 in Ohio Valley Conference play, which led to their fourth consecutive OVC tournament appearance under head coach Rekha Patterson.

The Redhawks were defeated 74-65 by Belmont in the OVC tournament last season. Then-senior guard Adrianna Murphy scored 20 points to end her illustrious career as a Redhawk. In her time at Southeast, Murphy won OVC Defensive Player of the Year for the 2017-18 season.

This season, the team will need to make up for the absence of their longtime guard and will look to their 10 returning players to do so.

First-team All-OVC junior guard Tesia Thompson will step into more of a leadership role as the team will look to her as a leader and mentor. Last season, Thompson averaged a conference-leading 18.2 points per game while pulling down seven rebounds per game.

Thompson believes the key to winning is emphasizing togetherness and team chemistry, due to the loss of two senior players.

“[Murphy]was a big part of our team, she was the fastest, she was tough … she kept us together. The players we have here, such as Carrie Shephard, will provide us with her playmaking ability and high IQ level,” Thompson said.

Thompson was clear about the type of season she wants and expects from herself.

“I want to win [OVC] Player of the Year and continue to improve along with team … I want to bring us together,” Thompson said.

Senior Guard Carrie Shephard— one of the four returning seniors along with Jessie Harshberger, Iyanna McCurdy, and Jocelyn Taylor— spoke about the team's goals as well as hers for the season.

“Since [my] injuries, my main goal has been trying to get back to that Carrie Shephard I used to be … I just want to be the best version of myself,” Shephard said.

Shephard also said she hopes the team will win the OVC tournament this year.

Returning for her fifth season and coming off of her fourth consecutive postseason appearance, Patterson said her team’s main focus this season is going to be a collaboration of mentors leading the way and players perfecting their crafts.

“I think the biggest thing we have to focus on is working to become our best every day by serving each other and serving the program first … I want to have a player-led team that represents the university in the best way possible,” Patterson said.

Patterson went on to speak about progressing as a team and how the team has the potential to be better this season following the loss of Murphy.

“What [Murphy] has done for this program can’t be put into words, and I do think she leaves a legacy; when our returning seniors step on the court, hopefully they can take a little bit from her,” Patterson said. “We have a veteran team, and I expect us to be prepared in those possession ball game moments.”

The Redhawks’ season tips off against the University of Missouri-St. Louis at 11 a.m. Tuesday, Nov. 5 at the Show Me Center.