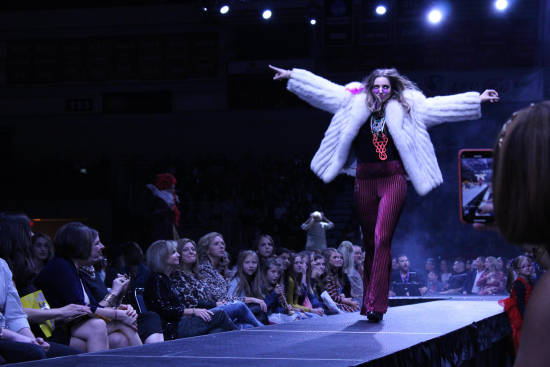 A Tina Turner look-alike twirled, gold fringe flying, as she danced in front of the cheering crowd. Sheer fabric floated behind a model as she gracefully draped the fabric behind her. A toddler in the audience danced along to the show’s blasting music while wearing a sequined Superman outfit.

In addition to vintage clothing, the show featured live reptiles, fire and several rollerskating models. Each outfit echoed the model’s appearance and personality, as some also carried props, lip-synced to music or struck iconic poses.

The runway led models from backstage before diverting into four separate wings, allowing a performance as several models to walk on the runway at once. The models struck a pose at the end of each runway, sometimes waving to the crowd or blowing kisses.

The focus of the night was on heroes — something audience member James Fortner said means making a positive change in someone else’s life.

“Being a hero takes many forms,” Fortner said. “I would define it as making a difference in some way in someone else’s life. It doesn’t matter what way, as long as you make a positive influence on someone.”

During the first segment, as heroes walked the runway, one woman stepped out in loungewear and a bathrobe, holding the hand of a child. She represented the women who the Safe House for Women helps daily.

The annual VintageNOW fashion show has raised some $425,000 in the past decade, taking home $98,500 last year after expenses, according to Jessica Hill, director of the Safe House for Women in Cape Girardeau.

A portion of these proceeds recently funded a new shelter facility, Hill said. Out of the total amount raised, $240,000 from three years’ fashion show proceeds was used to build a $2 million shelter.

The new 40-bed shelter opened in June, replacing a former 17-bed facility. It provides better accessibility for those with disabilities, as well as a private room, which was used recently to accommodate a male victim of domestic violence, Hill said.

“We are really helping clients become safe and sustainable after abuse,” Hill said. “It’s a really unique event that gives us that opportunity.”

Safe House Mental Health Counselor Amy Binson has attended the fashion show for the past three years. Binson said as many women enter the shelter with only the clothing on their backs, the Safe House for Women, funded by events such as VintageNOW, can help provide these resources for individuals.

Southeast sorority Alpha Chi Omega volunteered at the event for the second year in a row. Member Stephanie Williams said the funds from this event can locally impact women and men in the community affected by domestic violence.

Model Breyana Ray walked the runway in an outfit inspired by Beyonce’s “Lemonade,” wearing a yellow dress and carrying a baseball bat similar to the singer’s “Hold Up” music video.

“My final thought before walking on stage was that this experience really isn’t about me, it isn’t about any of the models, it’s about the women we walk for,” Ray said.