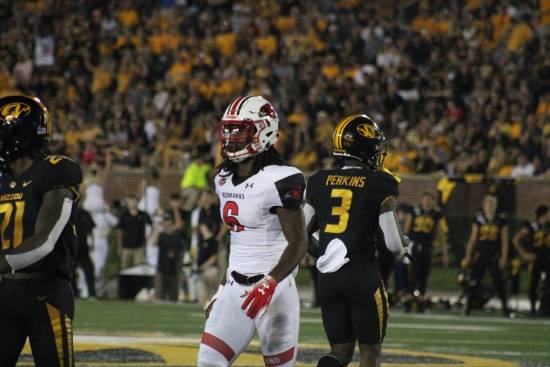 Senior Kristian Wilkerson walks to the huddle against Missouri on Sept. 14 in Columbia, Missouri.
Photo by Zach Tate

Redshirt-senior wide receiver Kristian Wilkerson has set the bar high for future athletes in his position. Wilkerson set the school record for career receiving yards Oct. 5 when he hauled in five passes for 124 yards to put his career total at 2,623 yards. That number has risen as he now has 2,874 yards with five games remaining in his career.

“Hard work will pay off sooner or later if you just stay focused and persistent,” Wilkerson said.

Not only did Wilkerson break the school record for career receiving yards, but he also tied the record for touchdown receptions with 29. Wilkerson credits his coaches for consistently challenging the team.

“[I have] great coaches pushing me every day and just wanting to be the best you can be,” Wilkerson said. “We’re just learning every day, trying to be better and having fun while learning.”

Wilkerson remembers his introduction to football by a friend.

“I was bigger than everyone growing up,” Wilkerson said. “My best friend in first grade told me to come play football so I could block for them.”

Wilkerson said he slimmed down and became a tight end when he got to middle school.

“A coach moved me to tight end … because I could catch and jump over people,” Wilkerson said.

Wilkerson credits one of his high school coaches at Craigmont High School in Memphis, Tennessee, for a realization he could play football at the college level.

“My coach in high school told me that I was going to be able to go to college playing football because I really stopped playing when I got to high school,” Wilkerson said. “He was like, ‘You can go to college,’ and that’s when I realized I needed to take it serious.”

As committed as he was to football back then, Wilkerson was a two-sport athlete.

“I played basketball actually. I’m from a basketball city so basketball is like pretty much the way to go,” Wilkerson said.

Wilkerson chose Southeast, in part, because he saw a former Redhawk being noticed by the NFL.

“I saw they had a great receiver getting scouted by [the] NFL, so I wanted to come through,” Wilkerson said. “That was my goal coming in, to go to the NFL or have a shot at least.”

He said he never doubted if football was for him.

“I just loved the game because everyone played it,” Wilkerson said. “I played it growing up so I said, ‘Why not continue playing?’”

Wilkerson models his game after Houston Texans wide receiver DeAndre Hopkins and New Orleans Saints wide receiver Michael Thomas. Both receivers are among the taller receivers in the NFL and have good hands and leaping ability.

The NFL may have been his motivation for college ball, but Los Angeles Laker LeBron James is the reason Wilkerson wears number six.

“I love LeBron James. That’s kind of why I wear number six since he wears number six,” Wilkerson said.

In the offseason, Wilkerson exercises meticulously to stay in game shape.

Wilkerson and the Redhawks are back in action Saturday at 1 p.m. when they host the University of Tennessee-Martin for Southeast’s homecoming.