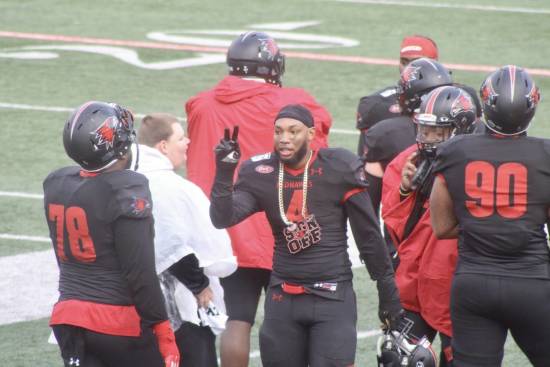 Junior linebacker Omardrick Douglas wears the "Sign Off" chain after his game winning pick six against UTM on Oct. 26 at Houck Field.
Photo by Ramond Buck

Defense was the story for Southeast in Saturday’s 17-10 win over the University of Tennessee-Martin. Junior outside linebacker Omardrick Douglas had the game-winning touchdown with an interception return on a pass from the Skyhawks’ redshirt-freshman quarterback John Bachus III. The win marked the 11th straight home win for Southeast, dating back to last season.

With just over five minutes left in regulation, Douglas intercepted a Bachus pass and capped off the return with a reach across the pylon to give the Redhawks a 17-10 lead.

With just two seconds remaining in regulation junior defensive back Bydarrius Knighton intercepted Bachus’ pass attempt in the endzone to seal the win for the Redhawks.

Knighton said he didn’t jump to try and intercept the pass because he didn’t want to knock one of his teammates off their path.

“I saw the ball in the air, and I actually didn’t jump,” Knighton said. “Someone tipped it and it fell in my hands.”

“Every time I make a decision, it’s based on winning this football game right now,” Matukewicz said. “I just felt like [Pyle] was going to give us a better chance.

“The biggest thing that was going through my mind was to do anything to help the team,” Pyle said.

With just over a minute into the second half, Pyle broke off a 61-yard touchdown rush to tie the game 10-10. The rushing touchdown from Pyle was the only offensive touchdown for Southeast in the game. Steady rainfall had a big effect on both offenses in the game.

“Obviously with the rain, it’s always a little harder. The balls are wet, a little heavier,” Pyle said. “Gonna have to throw it, they gotta throw it, too.”

Matukewicz said despite Pyle’s success, Santacaterina is still the starting quarterback for the Redhawks going forward.

“[The] best part is he’s just a junior, so he’ll continue to get better,” Matukewicz said. “Our special teams units really showed up, I thought.”

The passing game was a letdown for Southeast. Santacaterina and Pyle were a combined 11-29 on passing attempts for 178 yards.

“It’s been terrible,” Matukewicz said. “At the end of the day, [we’ve] just got to do a better job coaching them. I mean, [we’ve] got better players than the performance we’re doing.”

Sophomore wide receiver Aaron Alston had six receptions for 101 yards and was the only bright spot in the passing offense.

Alston left the game in the fourth quarter with an injury - Matukewicz said the medical staff may have been “trying to rule out a concussion.”

The Redhawks are back in action at 2 p.m. Nov. 2 when they travel to Nashville, Tennessee to take on Tennessee State.