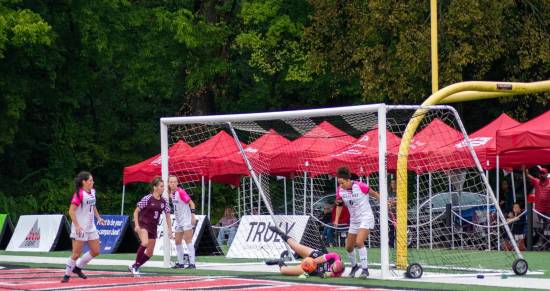 Sophomore goalkeeper Bailey Redden makes a save against SIU on Oct. 6 at Houck Field. Redden received a red card in the Redhawks final regular season game.
Photo by Jelani Days

The Redhawks women’s soccer team won the Ohio Valley Conference Championship and clinched the number one seed in the OVC Tournament for the first time since 2014. They defeated Jacksonville State 2-0 on Friday Oct. 25 and also defeated Tennessee Tech 3-2 on Sunday, Oct. 27. The OVC regular season champion Redhawks will now host the semi-finals and finals of the OVC Tournament on Friday Nov. 8 and Sunday Nov. 10.

“Heading into the tournament, we’re not going to stray from what we’ve been doing all season. We’re going to continue to focus on having confidence, being organized on defense, and growing our courage,” Head Coach Heather Nelson said.

Friday’s game against Jacksonville State saw a dominating performance by Southeast with the Redhawks holding the Gamecocks to one shot all night. Southeast had two quick goals in the first half and never looked back.

Sunday’s game against Tennessee Tech was a back-and-forth affair with the Golden Eagles scoring in the 26th minute of play on a shot from sophomore defender Natalie Rolen. Southeast equalized the game quickly with an unassisted goal from Brien in the 30th minute. The game went into halftime with a 1-1 tie.

“I wanted to take it inside and just place it in the corner, and then there’s nothing better than your teammates jumping on you,” Brien said, “It was a moment I won’t forget, anything to get a point on the board.”

Southeast came out of halftime with a vengeance, scoring another unassisted goal after just one minute of play, this time by junior midfielder Lexi Grote to help the Redhawks take the lead 2-1.

“The game was really hectic at that point so I knew the goal would be a difference maker; I really had to pick it up and do it for my team and especially the seniors,” Grote said.

The Redhawks extended their lead to 3-1 in the 79th minute of play off the third unassisted goal of the day, this time from freshman forward Megan Heisserer.

“I just wanted to get the shot off and giving all I had for the seniors on their senior day. Being able to play my heart out for them meant a lot for today,” Heisserer said.

Then things got interesting. In the 84th minute, sophomore goalkeeper Bailey Redden was ejected from the game after fouling Golden Eagles senior midfielder Tina Marolt in the goal box. Redhawks senior midfielder Cassidi Tomsu entered the game as goalkeeper and Marolt was able to get the ball by her on a penalty kick to cut the Redhawks’ lead to 3-2.

Southeast played out the last five minutes of the game to take home a 3-2 victory and the OVC regular-season championship. The Redhawks’ next game will be in the OVC Tournament Semi-Finals on Friday, Nov. 8 at Houck Field against an undetermined opponent.