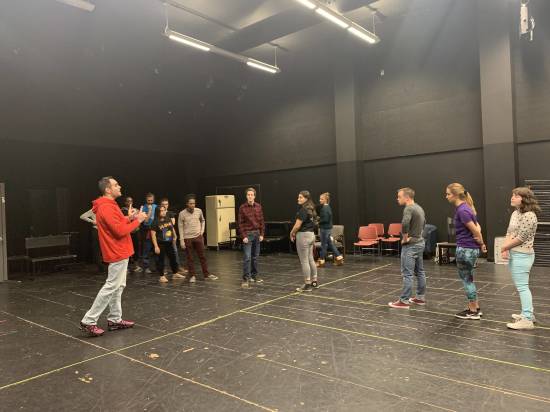 Southeast welcomed back alumnus Nick Cutelli for Homecoming weekend with the opportunity to teach a theater master class at Southeast River Campus on Oct. 25.

Cutelli took a trip down memory lane as he shared changes he saw during his campus visit, as compared to when he graduated from Southeast in 2006.

“There is a lot more stuff here; the biggest thing we had when I was here was White Castles, and that was pretty big news,” he said.

Prior to the River Campus’ construction 2013, the theatre department operated out of Grauel in which Cutelli performed in the Rose Theatre often as a student.

During his time at Southeast, Cutelli said he felt as though professors prepared him for what he is doing now.

“One thing they really focused on here was building up confidence which kind of makes our program better than any program because they focus more on the mentality of it,” Cutelli said. “SEMO has taught me to shake off the rejection and move forward as well as the technique and other things I did here.”

After college, Cutelli got a few opportunities to perform in big shows that kick-started his acting career.

“When I graduated, I already had booked a gig at the Lost Colony and performed with Lynn Redgrave, a big Broadway actress who [later] passed away,” Cutelli said. “I also went back to St. Louis and did a lot of theatre and got my equity card, and after that, it just started to go up from there.”

After many years of growing and perfecting his craft, Cutelli had favorite moments to share.

“One fun thing I did was a voice-over on a videogame a couple years ago, and it was the first time I’ve ever done that,” Cutelli said. “I got to play multiple characters and do random sound effects, but they didn’t tell me what the game was until it came out, and it was called ‘The Evil Within 2.’’

As an actor, Cutelli has goals he aspires to reach, and he has a game plan.

“I do a lot of commercials and voice- over stuff which is really good, but one of my goals right now is to break more into theatrical stuff,” Cutelli said. “I also do entertainment news for WeHoTv News, a local LA news [company] for West Hollywood, and my goal for this year is to go after an Emmy nomination.”

Juggling work and kids often takes tolls on working parents, however, it works out well for Cutelli.

“It’s nice because a lot of my stuff I can work from home so I can be like a part-time stay– at–home dad, which is good because we don’t have to get a full-time nanny,” Cutelli said. “The good thing is a lot of actors in LA have kids, and when they get old enough, they just bring their kids to the audition.”

In the spirit of giving back to the university that taught him, Cutelli shared some words of encouragement to aspiring actors at River Campus.

“I always tell actors when you major in theatre it is a good sign, like you really want to follow this career and you’re confident you want to do this for the rest of your life,” Cutelli said. “It’s a grind, and a lot of actors fail because they don’t want to take on the grind. It’s a lot of work, but it has big payoffs.”