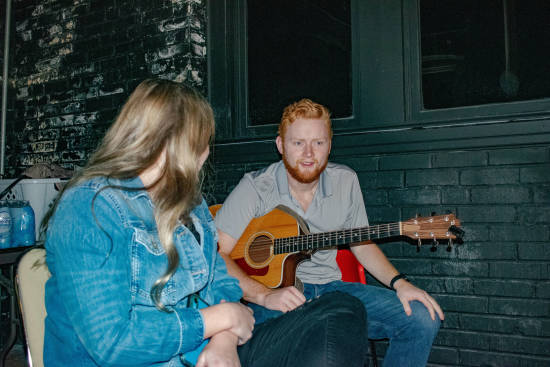 Talent is everywhere, especially within the walls of the Southeast’s Academic Hall Auditorium where the annual Homecoming talent show was held Oct. 22.

As the show began, Planning Committee President Anthony Pulliam said he felt the event was going to go well, with hopes of a positive outcome.

“I’m interested to see all of the students at Southeast Missouri to show their hidden talents,'' Anthony said.

This year’s host, poet Ebony Stewart, warmed up the crowd with a few jokes as the seats filled. She was surprised at how well the crowd responded when she prompted them to snap, saying, “some of y’all put on lotion today,” which received immediate laughter. 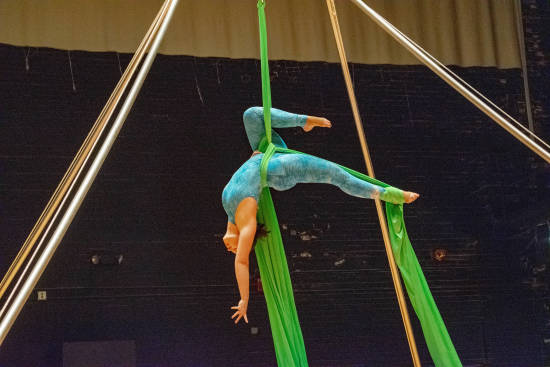 Silence filled the room during acts, and energy, positivity and encouragement were displayed in between time slots for each contender.

Momentum surfaced the crowd with harmonic claps to introduce the first act performed by Alex Major. Alex performed an aerial arts performance to a cover of Britney Spears’ “Baby One More Time” by Slothrust, which lead to an uproar of applause from the crowd.

The next act was Skyler Hornbeak and David Kinnison, with a duet song selection “Shallow” by Lady Gaga and Bradley Cooper, an original song written for the Academy- award winning film “ A Star is Born.”

As scattered chats and loud laughter filled the auditorium, a small conversation took place about how the contestants were feeling before the show. Junior Patti Meadors sang “Sunday Morning” by Maroon 5 and said her sorority sisters encouraged her to try out.

“All my sisters kind of pushed me to do it because they haven’t had anyone to represent them in the past,'' Meadors said.

With confidence, Meadors stepped up to the plate and flaunted her vocal range for the third performance of the night.

In the same way as the recent performers, Taylor Manning presented her talented voice, delivering with strong vocal tones covering Ariana Grande’s “Almost is Never Enough,” hitting the stage as the fourth contestant.

She was followed by The Phinest Phi's from Alpha Phi who displayed a series of cheerleading stunts to "Hollaback Girl" by Gwen Stefani.

With cheers and excitement still in the room, Jack Lankford hit the stage to sing “She talks to Angels” by the Black Crowes.

Throughout the show, the audience remained attentive. Further into the show, Jada Jay, contestant, gave the crowd a cover to “I Have Nothing” by Whitney Houston, showcasing her tone and pitch range.

The crowd was brought to a hold, to take time and vote for the winning stand. Voters decided the best was saved for last as Katelyn Robertson took home first place for a contemporary dance performance to Ingrid Michaelson’s “Can’t Help Falling in Love.”

Robertson said it had been a while since her last performance, but that didn’t stop her from taking the stage Tuesday night.

“I haven’t performed in a long time, since nearly two or three years ago when I used to do competitive dance,” Robertson said.

Robertson took home a $75 check for first place. Her competition received encouragement from the remaining crowd.