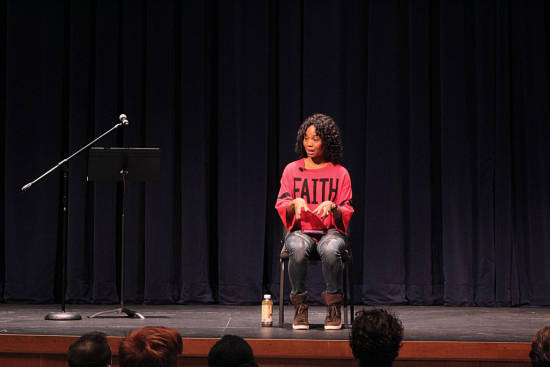 Alumna Kathryn Taylor Smith speaks to Holland College of Arts and Media students on Oct. 25. Smith graduated from Southeast with a Bachelors of Science in Psychology. Smith decided to follow her passion of acting and moved to LA after being a family therapist for several years.
Photo by Madison Abanathie

On a stage in front of, approximately 25 Southeast staff and students, alumna Kathryn Taylor Smith returned to the university to speak about her experience in the acting industry.

Smith has come a long way since her Southeast days, her one-woman show, “A Mile in My Shoes,” has become increasingly successful since its conception in 2018.

“For me, it’s just an honor,” Smith said. “When you’re in school, you never think one day you’ll be back talking to other students and sharing your story. It makes you feel like you’ve done something well to be able to share that with someone else.”

Smith graduated from Southeast with a Bachelor of Science in psychology and a minor in mass communications. She worked as a family therapist during the day, while pursuing an acting career by night.

With little tying her down, Smith decided to move to Los Angeles to join the big leagues of acting.

“That’s what my passion was,” Smith said in her speech. “For some reason that just wouldn’t let me go. I told myself, ‘You know what, I’m going to move out to LA’ ... I just never left, because I followed whatever that little voice inside my head [was] that said ‘You know what, you got something here.’”

Smith began by listing her “Top 10 need-to-knows” for acting, before moving on to a question and answer forum, followed by a meet and greet on the stage of Bedell Theatre.

Smith believes it is an actor’s duty to leave the world a better place than they entered it, an idea Smith repeated throughout her speech. This belief is also one of the driving forces behind Smith’s research and production of “A Mile in My Shoes,” a one-woman show in which Smith portrays 19 characters within the homeless community.

Smith interviewed members of the homeless community in LA and those who interact with them. She took notes, wrote down their stories and started developing characters. The ideas sat for five to six years before Smith started to develop it for the Hollywood Fringe Scholarship in 2018.

“The premise is about educating and providing awareness and empathy for the homeless community,” Smith said. “I don’t think Southeast is any different than any other community, in the sense that homelessness exists. So if I could do this show at every college, at every theatre, in every city, in every country in the world, I would do that until homelessness is eradicated.”

Though Smith wasn’t an acting major while at Southeast, her career has taught her some valuable lessons the Holland College of Arts and Media students were ready to explore.

“As an artist, we have an obligation to make change,” Smith said. “I feel that we are one of the original change agents. We have a responsibility to create social movements in the country … We also have the ability to pinpoint an issue and make someone say, ‘Stop and listen to me.’”

Following the conclusion of the event, Smith stated she wished Southeast had this type of event when she was in school. However, Smith was glad to be that role model for students and aid them in their acting careers.

“I wish I had someone come and talk to me about life as an adult, working,” Smith said. “For me, I feel like my experiences were all created for this moment. I get to share a little bit about myself and make someone else’s journey a little bit easier, a little bit better, a little bit faster than mine was.”