Take a step into the unknown with the Southeast scuba club 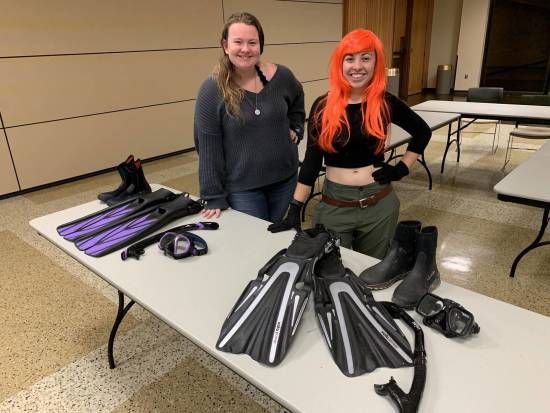 The scuba diving club at Southeast was founded when Bruce Skinner posted on Living at Southeast asking who would be interested in starting the club. Two girls who shared the same passion for the sport immediately replied and have been leading the club for the past two years.

Co-founder, and now seniors, Amanda Milbrandt and Tori Wright met while taking the same chemistry classes during their freshman year and have been in charge of the scuba club since the fall of 2018.

“Scuba diving is a whole other world from anything you can experience,” Wright said. “When you go on vacation, you know above ground experiences are amazing, but there’s a whole side that you never see below the water.”

Contrary to popular belief, there are many places to scuba dive in or around Missouri. These places exist in a place in Illinois called Mermet Springs, and Bonne Terre, where an underwater mine is located. Wright also said scuba diving can be done in freshwater as well as saltwater.

“There are multiple places around here for people to go,” Wright said. “We just wanted to get the club started for people who are interested in it as a hobby or plan to pursue it as a career.”

Milbrandt, the president of the club, describes its members as an eclectic group.

“We have college students who come that are afraid of the water, some who can’t swim and then there are some who are already certified,” Milbrandt said.

She also said they have connections to Cape Diamond Travel, where people can get certified after taking their required courses.

“Discover Scuba is where we bring instructors, gear and have the pool reserved at the Rec Center,” Milbrandt said. “So all you have to do is show up, listen to our crash course, throw some gear on you and throw you into the pool.”

With three of these sessions under their belts, both girls have noticed the group growing on Facebook. Another place they see growth is in their members’ interest to try new places to scuba dive.

“Now that we have a bigger group and more certified members, we are trying to get a trip to Florida off the ground for Spring Break,” Milbrandt said.

Another outlet the duo wants to pursue is the places around Missouri that will open for diving when the weather gets warmer.

“Right now, it’s about getting people out there,” Wright said. “We are still growing our club and trying to get as many people to come to our Discover Scuba events.”

The club leaders will post their next date on the Living at Southeast or SEMO Recreation Services Facebook groups soon, but until then, they will meet every Wednesday at 6:30 p.m. at the University Center in Ballroom B.