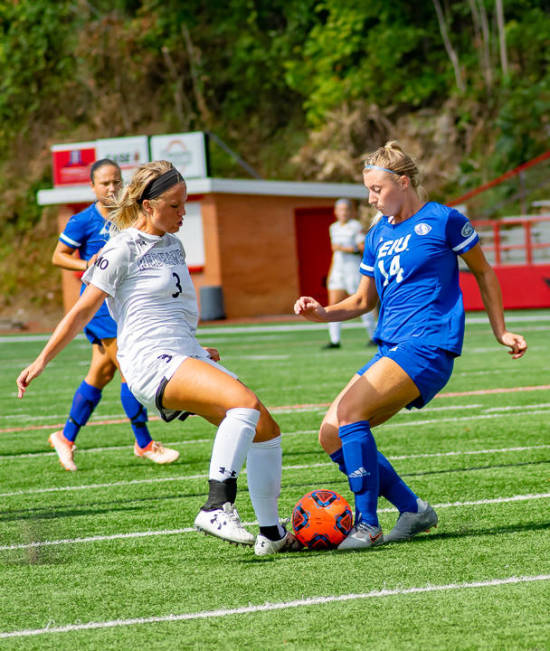 Sophomore defender Lauren Welker steals the ball from a Panther during Southeast's 1-0 win over Eastern Illinois University on Sept. 22.
Photo by Jelani Days

On Oct. 28, Southeast soccer defeated Tennessee Tech 3-2 to win the school’s sixth Ohio Valley Conference title and its first since 2014.

The win came at a price, as goalkeeper Bailey Redden received a red card in the 85th minute after challenging a Tennessee Tech striker. Redden started every game for Southeast this season but will miss the Redhawks’ semifinal match.

Senior forward Jennifer Brien broke down how much this win meant to a team that started 2-8 last season and turned around to win the conference.

“It means everything. We made this goal at the beginning of the season and for all of our hard work to finally pay off with a ring and the opportunity to host the tournament is something none of us will ever forget,” Brien said. “I am so excited to see what this team will do and how far we will go.”

Southeast finished 11-4-1 overall and went 8-1-1 in conference play to capture the title. The Redhawks also went 7-0 at home and will host the semifinals and finals of the OVC Tournament on Nov. 8 and 10.

No. 1 Southeast earned a bye in the first round of the tournament and will play No. 4 Southern Illinois University - Edwardsville at Houck Field on Nov. 8 at 6 p.m. If the Redhawks win, they will advance to face the winner of No. 2 Murray State and No. 6 Belmont for the championship.

Southeast defeated Belmont 2-1 in its home conference opener Sept. 20 but fell to Murray State 5-0 on Sept. 29.

The championship match will be Nov. 10 at Houck Field at 2 p.m.