Big first half leads Southeast to victory in home opener 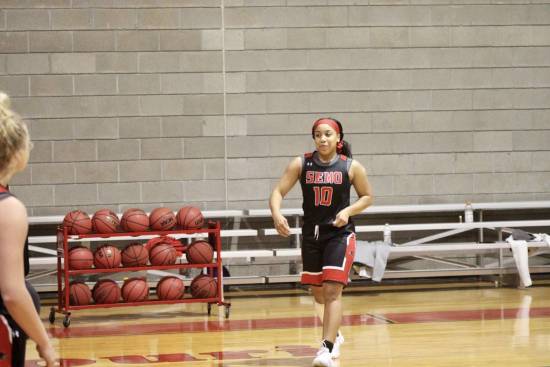 Sophomore guard Taelour Pruitt runs onto the court during a scrimmage at the Southeast Recreation Center on Oct. 18.
Photo by Ramond Buck

The Southeast women’s basketball team got off to a slow start but bounced back in a big way defeating the University of Missouri-Saint Louis Tritons 70-56. The Redhawks used a 20-1 run late in the first quarter to hold a 27-16 advantage after 10 minutes of play. Consistent team play was a key factor in the victory.

Southeast was led by redshirt-senior guard Carrie Shephard, who posted a career high 26 points on 9- for-14 shooting while going 5-for-7 from the three point line.

Shephard said she focuses on being an overall playmaker rather than just a scorer.

“I don’t look to score, I look to make plays,” Shephard said. “[My] first option is score, if they take that away then someone has to be open.”

“They can make good decisions with the basketball. They can score it, they can shoot it, [and] they can pass it,” Patterson said. “I think they are really good defenders as well.”

Patterson credits freshman guard Sophie Bussard for her play off the bench.

“She gave us a great shot in the arm,” Patterson said. “She would get out in transition and get some layups for you, [and] she gets to the offensive rebound.”

Bussard had 10 points and four assists off the bench for the Redhawks.

Sophomore guard Taelour Pruitt was the second leading scorer for the Redhawks, as she had 11 points on 5-for-11 shooting. Pruitt also had five steals to lead Southeast.

Shephard and Bussard logged the most minutes with both playing 32 minutes.

The Redhawks fell behind 12-3 early in the first quarter. Shephard said there wasn’t enough energy on defense.

“I feel like our intensity on the defensive end wasn’t there,” Shephard said. “Our focus had to be better.”

Patterson said the team needed to refocus after the slow start.

“It was a combination of us really just like taking a deep breath and saying let’s do the things we know we’re capable of doing,” Patterson said.

Despite the hot start from UMSL, Patterson was happy with how her team responded from the slow start.

“This group was just mature; they’re like, ‘OK, this is what we need to do and let’s do it,’” Patterson said. “I want to see us continue to be really good at what we’re really good at and focus on that.”

The Redhawks dominated the boards, out-rebounding the Tritons 54-31. Eighteen of their 54 rebounds came on the offensive end.

The win moved Southeast to 1-0 in the young season. Southeast is back in action at 2 p.m. Nov. 10 when they host the University of Evansville.