Southeast alumnus doing what he can with what he’s got 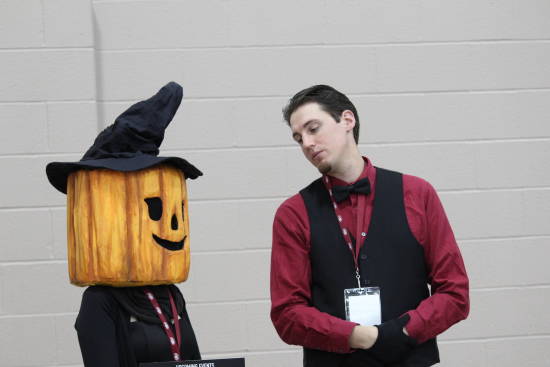 Eric Ralfs and his wife at Cape Fear Con on Oct. 19. They attended the event to share information about Halloween for their Facebook page.
Photo by Madison Stuerman

Cape Girardeau is sometimes called a black hole by students because it will suck you in and make it hard to leave.

Southeast alumnus Eric Ralfs has a more positive outlook though, and likes to follow former U.S President Theodore “Teddy” Roosevelt's quote, “Do what you can, with what you have, where you are.”

Even though Ralfs grew up in St. Charles, Missouri, he has been on Southeast’s campus since 2008. When he attended Southeast, he was a ticketer for the Department of Public Safety (DPS) and was given the nickname “Trench Coat Guy” because he was always wearing one.

It's easy to become a villain when one’s responsibility is ticketing students, so he became infamous quickly.

Ralfs isn't bothered by the nickname and sports his trench coat to this day. He still works for Southeast but no longer as a ticketer.

“I’m part of what's called the Project and Relief team. Basically, what we do is we handle the work that's a little more technical or long-term projects,” Ralfs said. “For instance, things like restoration and carpet cleaning on campus.”

Not only does Ralfs support Southeast in that capacity, he's also virtually engaged with his alma mater. Along with his wife, Rachael Ralfs, Eric runs a facebook page called SEMO Halloween Events, which he uses as a way to help students at Southeast community catch up on all spooky local happenings.

Ralfs mentioned he just got married last year; as a result, he hasn't been able to host any events himself, but said that could change in the years to come.

The page was created in 2016, and Ralfs and his wife post content daily, starting in June through November.