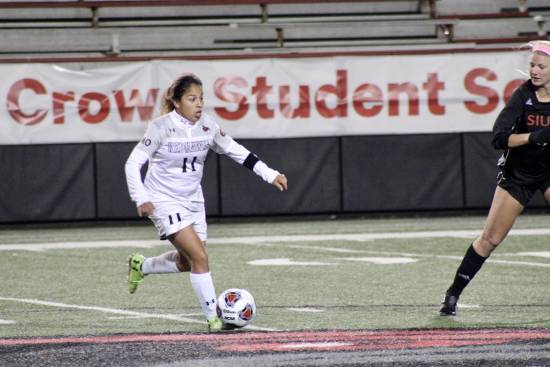 Senior midfielder Esmie Gonzales carries the ball near the middle of the field against SIUE on Nov. 8 at Houck Field.
Photo by Ramond Buck

The Redhawks outshot the Cougars 18-8, finishing with ten shots on goal for the night. Freshman Hailey Block scored Southeast’s only goal on a penalty kick late in the second half after falling behind 2-0.

A red card given to sophomore goalkeeper Bailey Redden in the final regular-season win over Tennessee Tech on Oct. 27 to gain the regular-season title, kept Redden from playing in the semifinal match up. Redden started every game of the season prior to the OVC tournament. Junior Abby Rollet, of Southeast’s softball team, was named goalkeeper of the semifinal game in absence of Redden.

“Nobody gets to go to sleep thinking ‘I get to play a sport I thought I'd never get to play again competitively at a Division I level,’” Rollet said. “It was pure excitement and nervousness. With an amazing team in front of me, they always had my back and I never had to second guess my actions.”

Southeast coach Heather Nelson said three field players were chosen to possibly train and prepare for the position of goalkeeper for the semifinal game before she heard about Rollet.

“She trained with us for the past week and you would think she’s part of our program,” Nelson said. “She’s got an absolutely wonderful attitude, smiles all the time, completely coachable and you can tell all she wants is what’s best for the team.”

After the loss, senior forward/midfielder Cassidi Tomsu said she wouldn’t want to end her career anywhere else but Houck Field.

“Even though we lost, I would rather be here at home surrounded by everyone that loves us and supports us,” Tomsu said. “That’s all I can ask for.”

Tomsu credited her teammates in helping her become the person she has grown to be.

“I consider them my sisters. It’s heartbreaking now that we are done, but I get to take a little piece of them as I go out and finish the rest of my time here at SEMO,” Tomsu said. “As I start my professional career, they have taught me how to handle different people, how to love different people, so they are a key aspect in making me grow as a person.”

SEMO hosts this year’s OVC tournament and SIUE moves to face the Belmont Bruins in the OVC Championship game Sunday, Nov. 10 at 2 p.m. on Houck Field.