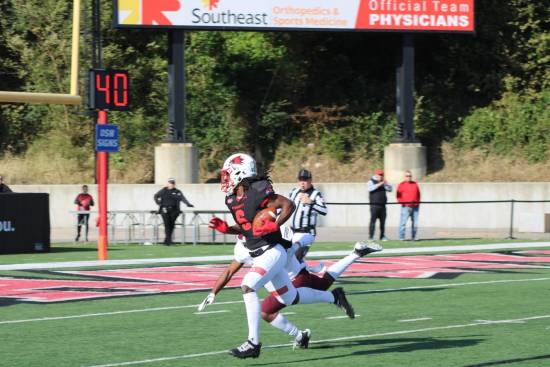 Wilkerson hauled in 10 passes for 254 yards and 2 touchdowns.

“What a performance,” Southeast coach Tom Matukewicz said. “I didn’t realize he had that many yards.”

“He has a weird knack for adjusting to the ball while creating space at the same time,” Santacaterina said. “I think that’s what makes him different.”

Santacaterina said he was surprised Wilkerson wasn’t double-covered more than he was.

“He has 200 yards and you’re still not going to do it? Alright,” Santacaterina said of the Colonels’ defense.

With under 40 seconds remaining in the fourth quarter, sophomore running back Zion Custis rushed for a 12-yard touchdown to give the Redhawks a 38-31 lead. Custis had 16 carries for 88 yards including two touchdowns.

With the game tied at 31 and just over a minute left in the fourth quarter, SEMO’s defense stuffed an Eastern Kentucky run on fourth-and-one.

Senior defensive lineman Clarence Thornton said the message from the coaching staff was simple: Stop them.

“Get as much penetration as possible, get behind the line of scrimmage and make a play,” Thornton said.

It wasn’t all smooth sailing for the Redhawks as the offense turned over the ball four times in the first half.

Matukewicz said he was frustrated with himself for not having his team ready to play.

“I’m disappointed [with] how I coached this week,” Matukewicz said. “Obviously, the team wasn’t ready to play in the first half and played about as bad as you could and that’s an example of my leadership. I have to do a better job [and] figure out what happened there.”

With five minutes left in the third quarter, the Redhawks found themselves down 31-14.

Wilkerson said it’s easy for the team to stay together because they want each other to succeed.

“We love each other,” Wilkerson said. “We’re together a lot so that shows that we care. It’s like going to war with your family.”

Santacaterina commended the play of his offensive line.

“They were unbelievable,” Santacaterina said. “Every week they’ve improved, and [it’s] a good time to hit their stride because that was a really good defensive line and I’ve had really good protection.”

“That’s not a chip shot,” Matukewicz said. “It was windy, and I mean that was a huge play special-teams wise.”

The win moved Southeast to 7-3 overall and 5-1 in Ohio Valley Conference play. The Redhawks are currently tied with Austin Peay for second in the OVC, a half-game behind the University of Tennessee-Martin.

Southeast is back in action at 12 p.m. Nov. 16 when they travel to Charleston, Illinois, to take on the Eastern Illinois Panthers.