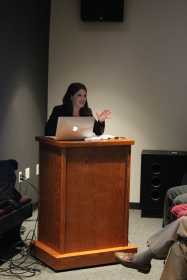 Dr.Lily Santoro addressing the audience during her lecture at Crisp Museum
Photo by Daria Lawson

Santoro is an associate professor in the Department of History and the historic preservation program at Southeast and teaches a multitude of history courses including early American History, the Atlantic World and Women’s History.

The lecture explored some of the discoveries and errors Americans learned about the cosmic universe during the late 18th and early 19th centuries.

Santoro began by summarizing the early adaptation of science education in the United States and its development beginning with examples like the Almanac, which tells moon phases, tide tables and various information about the weather.

Santoro said during this period, public education was not common, however, determined Americans turned to textbooks to continue to learn about astronomy— often through the method of recitation— simply repeating material until it was memorized.

She moved on to the problem experienced with textbooks was their unavailability as they were often not accessible to the general public, leaving Americans to visit museums the first developments of natural history museums.

Soon after, Astronomers began to map out sections of the sky through telescopes in an attempt to analyze the vast magnitude of the universe, understanding how many stars, moons and planets there were in this newly discovered ‘multi-world universe’.

Santoro said with the overwhelming amount of new information available, there were also many myths about the early understanding of astronomy, such as the belief of the sun being inhabited, the moon being densely forested and the idea that there were originally only eleven planets.

Santoro hopes audience members take away from the talk understanding the myths and ideas in the past that once seemed outlandish have been key elements in getting us to where we are today in science education.

“I hope they take away from it that history is fun, but mostly that people in the past are a lot like us — they’re just as curious as we are about the world around us but they’re also bringing baggage and assumptions with them that we don’t have today,” Santoro said.

Santoro said the importance and value of the lecture series reach beyond the classroom walls and into the community.

“One of the things I teach in the historic preservation program is that we really emphasize the importance of historians sharing their knowledge of the past with the public rather than just with each other or just students,” Santoro said.

After a holiday hiatus, Crisp Museum will continue the series with its next lecture scheduled on Feb. 4.