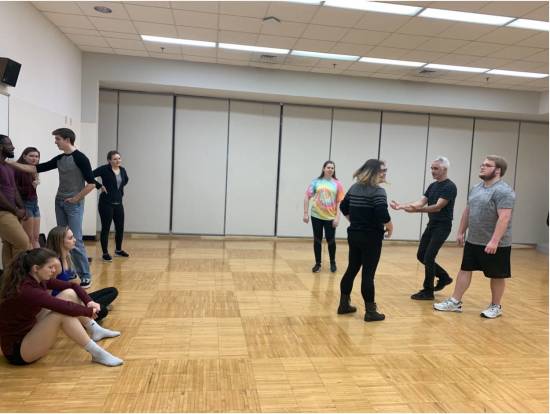 Instructor Shawn McNally holds his arms out, demonstrating steps to a dance technique on Nov. 10, 2019 during a club rehearsal.
Photo by Martin Woods

Traditional swing dancing has been given some flare, as the Aerial Swing Dance Club incorporates aerial practices into their routines.

For anyone trying a new experience, a certain level of doubt and unease is to be expected. The club's public relations officer Rebecca Nash had her own initial thoughts of doubt at first.

“I never thought I would be one of those people going through the air, turning upside down,” Nash said.

One of the club’s current instructors, Nash first joined in 2016. She had no prior experience and had attended a meeting with a friend and felt encouraged by the group to put on her dancing shoes.

The group’s welcoming nature and patient leadership created a safe space for Nash to take the chance to step outside her comfort zone. The club treasurer and co-lead instructor Shawn McNally claimed the group has a high retention rate due to these characteristics.

McNally’s admitted his initial feelings of paranoia about dancing were surprisingly wrong. He said, “You can actually teach someone to dance.”

“There’s a process. We do a lot of ground work first,” Nash said.

McNally explained there are two levels for learning to dance, and the beginning level is very easy. He explained that as a beginner progresses, being semi-physically fit is an important component for being able to properly do the more challenging routines.

Inexperienced dancers are shown tutorial dancing videos to help them learn and have several rehearsals before engaging in extensive practices with the group.

Experienced dancers learn new material presented during the rehearsal, alternate partners to establish comfortability and learn from watching each other.

Established in 2014, the club is full of members who are friendly, inviting and eager to teach easy-to-learn dancing material. An injury waiver is required before engaging in any activities.

For those interested, rehearsals are held in the Multipurpose Room at the Student Recreation Center at 6:45 p.m. on Sundays and Thursdays.