Crisp Museum takes visitors on a journey with folktales and music 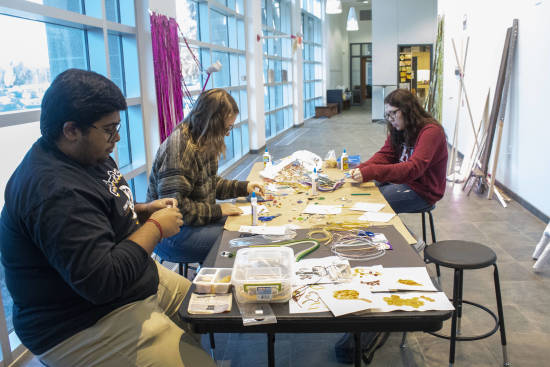 To make Family Day special, Crisp Museum provided a free event for visitors to come and enjoy a few hours of folktales, crafts, and music on Saturday, Nov. 9.

Attendee Marla Wasson heard a familiar song that appeared to be her favorite.

“My favorite was the very last song that they played, ‘Over the Rainbow’ by Judy Garland and it just was beautiful,” Wasson said.

Wasson proceeded to say how she believes more people should attend this event and how touched she was by it.

“There’s a lot of people that need to attend this event because it’s wonderful music, all types of music,” Wasson said. “I guess just with my age this music is just touching, and I can relate to it.”

Wasson explained how she is not a fan of heavy, loud music, and the pieces that were played met her interests of smooth jazz.

Along with the other Family Day activities, historian and author James Irwin presented “Jesse James: The Man, The Myth, The Movie,” a book about the outlaw who was an important figure in Missouri History.

“I’ve done three books on the Civil War, involving the guerilla war in Missouri, of course Jesse James was a guerilla, and I’ve been interested in this for two or three years now,” Irwin said.

Irwin expanded on why Jesse James has been significant over many years.

“Jesse James is a part of Missouri, he’s one of the most famous Missourians after Mark Twain,” Irwin said. “He does represent a troubled time in Missouri, both the Civil War and after it.”

Southeast junior Rahul Nair has always taken an interest in legends and shared what stuck out to him most.

“I never know how Jesse was killed or how he died, so I thought it was very interesting that he was killed by one of his conspirators or colleagues,” Nair said. “Also, how during the ‘40s, ‘50s, he was a very popular character to be put on TV and film.”

Another student Jordan Stonehouse, already familiar with Jesse James, had moments that surprised her as well.

“I can say one thing that stuck out to me was I did not know he had a sister in any of the movies, they were always brothers or cousins,” Stonehouse said. “I also did not know that his mother and his wife had the same name which was kind of weird.”