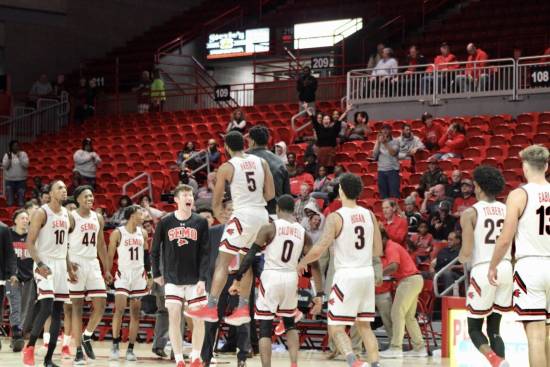 “I ended up coming over the top and when I did the play was designed for me to come off the handoff and either hit Alex [Caldwell] in the corner for the three or take a shot of my own,'' Harris said.

Harris spoke about his confidence late in the game and where his team's mindset was in the final minutes.

“My confidence comes from this guy beside me [my father]. He’s told me my entire career that if you put in the work and know what you’re capable of so why aren't you out there doing it…I’m dishonest to myself if I don’t play hard because it’s a god given talent,” Harris said.

About the team’s effort late in the game, Harris said, “Basketball is a game of runs, and that’s what I was relaying to my team … we’ve just got to keep our composure, that’s what it's all about.

Southeast Head Coach Rick Ray s spoke about the impact a player like Harris has on the team.

“You’ve got to have somebody out there with stones to make the plays you need and when he gets into space he always has an opportunity to beat his man,” Ray said. “ There’s a 40-year- old guy at the Y who’s not athletic but still out there getting buckets and the reason why is because he knows how to play basketball. I want our players to be that guy because we taught them how to play basketball … Chris has that ability.”

Ray gave insight on the last play and explained why it was designed to score early in the shot clock.

“When you’re in a situation like that you’ve got to get multiple attempts,” Ray said. “If you wait too long, you’re banking on the last shot and that’s it. Hopefully our defense would get a stop or foul and they'd miss the free throws.”

Harris, who had 15 points in his previous game against Vanderbilt, finished the game with 16

points, shooting 7-of-8 from the free throw line and 3-for-4 from three.

The Redhawks emphasis on defense helped the team’s consistency as it was their primary focus during the game. The Redhawks forced 15 turnovers in the game and held the Mastodons to 40.6% shooting from the field.

The Redhawks look to build more confidence heading into their next game against the Citadel on Tuesday, Nov. 19 at 6:30 p.m.