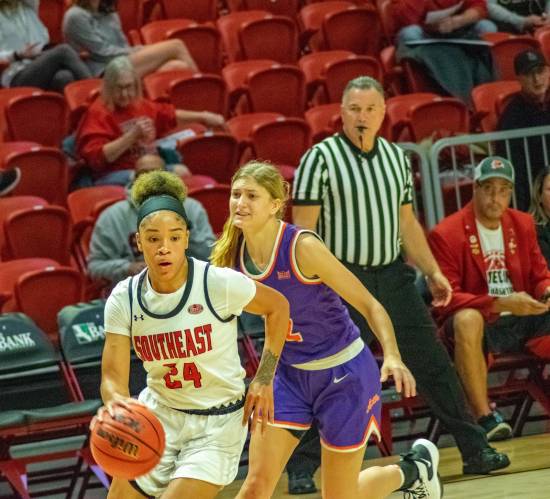 Junior guard Tesia Thompson evades an Evansville defender on Nov. 10 at the Show Me Center.
Photo by Jelani Days

The Southeast’s women's basketball team improved to 2-0 after they beat the University of Evansville 83-60 on Sunday, Nov. 10. Junior guard Tesia Thompson led the way with a team high 21 points while also tallying two steals and block.

The game was a tale of two halves as there was only a five point difference between the teams at the half, 34-29 Southeast. The Redhawks adjusted their play, outscoring the Aces 27-13 in the third quarter.

Thompson spoke about the third quarter surge and how she got her game rolling later in the game.

“I noticed that they were taking charges so I knew I’d eventually have to stop and pop,” Thompson said. “I think my shots were too hard in the first half, so I had to find my touch and feel for the second half.''

Southeast coach Rekha Patterson stuck to the game plan and made sure that her players came out of the second half ready to play.

“Our energy and ability to defend them allowed us to turn our defense into offense and more layups led to a higher field goal percentage. We have aggressive guards that can attack and score in a variety of ways and we felt like that was an advantage for us, it’s an easy way for us to get to the line and score points,” Patterson said.

The Redhawks controlled the pace of the game, leading the Aces for 37 of the 40 minutes. A total of four Redhawks finished the game with double digits in points, including freshman guard Roshala Scott (13), sophomore guard Taelour Pruitt (14), and senior guard Carrie Shephard (11) in addition to Thompson.

Southeast also got to the free throw line efficiently, shooting a total of 44 free throws in comparison to Evansville’s 19.

This is the first time the women’s basketball team has started 2-0 since the 2009-10 season where they finished 7-22, and the team looks to keep the momentum rolling.

“It feels a whole lot better to be 2-0 than 0-2 or 1-1, we’ve just got to continue to get better,” Patterson said. “This will be our first road game experience against an experienced team … it’ll be different but it’ll be a great environment.”

The Redhawks next match is against Arkansas State University (1-1) on Wednesday, Nov. 13 at 7 p.m.