Declining Enrollment among international, black students could result in culture as collateral damage 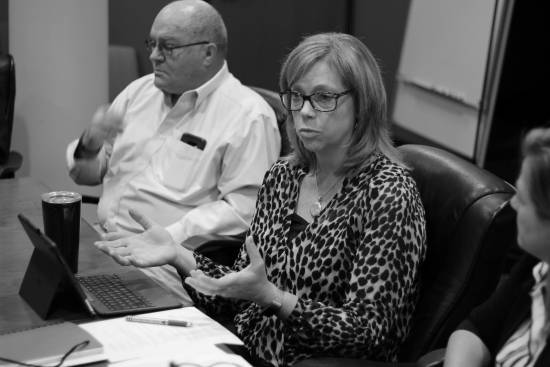 Debbie Below
Photo by Madison Little

“I would say that there's not much diversity [at Southeast], but it's also acknowledging where we are,” said Tabatha Tapia, an Ecuadorian native and exchange student studying at Southeast. “We're in the middle of the United States in a really, really little town and it's really hard to ask for diversity in a place that is mainly white.”

Deborah Below, vice president for enrollment management and student success, said global markets are developing their own higher education systems and Intensive English Program opportunities and improving English language training programs within their own countries. These developments have resulted in reduced demand for overseas education in the U.S.

The cost for 30 credit hours per year — based on fees in effect during the Fall 2019 semester for full-time undergraduate students — is $17,442 per Missouri resident in comparison to $23,472 per non-Missouri resident.

In contrast, the cost estimate for a typical international student, which may vary depending upon whether they participate in the Intensive English Program or pursue an undergraduate degree, is $26,051.76.

International Education and Services has limited funds in terms of recruitment efforts which requires staff to be mindful of the return on investment (ROI), Timlin said.

“When we invest money in recruitment or events in certain places. We need to make sure that wherever we’re spending our money, those numbers from that country are improving on the enrollment funnel,” Timlin said.

The enrollment funnel is a metaphor used to categorize the stages prospective students move through on their path to enrolling at a university.

“Our office is set up like an admissions office is set up with that recruitment agency model in mind. We don't really have a lot of labor dedicated toward prospective student development,” Timlin said.

Obtaining a U.S. visa as an international student or exchange visitor has gone from a 70% success rate about three years ago to about a 25% success rate today, according to Timlin.

Before a person can apply for a visa to enter the United States as a student or exchange visitor, the I-901 Student and Exchange Visitor Information System fee of $200 must be paid to the U.S. Department of State. The application fee for the most common immigrant visa types, including students visas, is $160.

“We had a record number of admitted international students, but the visa success rate is so much lower than it was three or four years ago, that our numbers continue to either stagnate or decline,” Timlin said.

International student enrollment has seen a 48.6% decrease over the span of five years, according to the Office of Institutional Research.

The coordinator of international student recruitment and orientation position was eliminated two years ago which was responsible for making connections and building a community.

“I think that we are a little bit short staffed in the sense that that we used to have a position that was specific to orientation and activities for international students,” Timlin said.

“There are ways we're making up for that,” Timlin said. “We're collaborating with campus life and we have a volunteer program to help us do some of those things.”

Southeast has a database of more than 100 recruitment agencies which interact with potential students.

“Our office doesn't have that much of an ability to make those connections with students all across the world, so that's where recruitment agents come in,” Timlin said.

Only an agent who assisted the student during the application process is eligible for a service fee. Southeast will pay approved agents a service fee of $2,200 for each represented student who enrolls.

At Southeast, there are just five students enrolled from the Latin American countries of Colombia, Ecuador and Peru.

Tapia participates in Southeast’s exchange program where the university and Universidad de las Américas, located in Quito, Ecuador, incorporate a one-year study abroad opportunity into a student’s curriculum at the same cost a Missouri resident would pay.

Tapia encouraged students to step outside of their comfort zones and take advantage of the culturally-enriching opportunity a study-abroad program can provide.

“I think Southeast is a very inviting place. There’s a lot of nice people, but it could definitely benefit from some Latino faces or different culture’s faces,” Tapia said.

“I do feel like you have to go looking for the black community in some cases,” said Ke-Lea Harris, president of the Black Student Union at Southeast. “When you come here you're surrounded by people that dont look like you.”

Student enrollment among black students consists of 8.3% of the population as of the fall semester.

“How are you going to make me feel welcome when I’m from the minority group?” Harris said.

Harris was shocked by the drop in numbers and wondered if the lack of representation in Southeast’s marketing was a factor in the decline of black student enrollment.

“We have to consider everything because our diversity is suffering at this campus from a lack of [international students] and people of color in every spectrum of campus, and everybody loses when it happens,” said Tamara Zellars Buck, president of the Black Faculty and Staff Alliance at Southeast.

Students come to campus and want to see diversity amongst the student body.

Eliminating staff positions, increasing tuition and other cost-saving measures may help to balance the budget, but they may also mean losing diverse cultures as collateral damage.