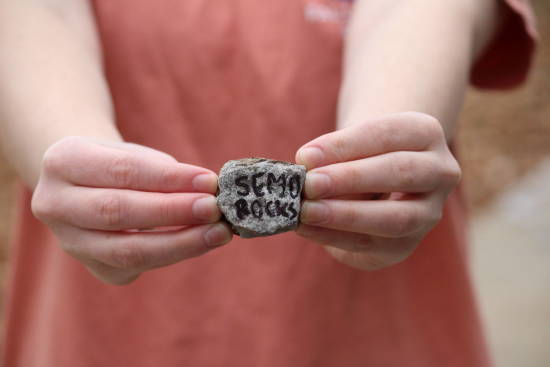 Southeast sophomore Mackenzie Ranchel holds a rock inscribed with the name of the group on Nov. 17.
Photo Illustration by Madison Stuerman

Many clubs are started and participated in by Southeast students on campus. However, Jackson natives Lisa and Mark McEachern, they wanted a club that could bring a whole community together.

Lisa and Mark both shared a passion for creativity and have always enjoyed keeping that in their lives. One day, Lisa stumbled upon an article posted on the “Kindness Challenge” Facebook page about Oldsmar Rocks in Tampa, Florida.

The article highlights an organization started in which people paint rocks and place them around town in any location. For the rock page followers, people can keep the rock they find, paint their own to share or share a picture of the ones they find on the Facebook page made for that area.

“I told Mark about it and he said that we should do that here,” Lisa said. “We both like to paint, and it seemed like a great way to spread a bit of kindness. For us, the goal is just to make someone smile and make their day a bit brighter.”

The McEacherns obtained information from the administrator of the Oldsmar page, Tara Brogan, and were ready to begin a club of their own, SEMO Rocks.

When the club first began in April 2017, the couple constantly painted rocks. However, with life catching up, they stepped back and let the club run itself —they don’t paint nearly as much anymore.

Participants can paint anything on the rock. Some people have even done seasonal themes on the rocks that can be seen on the club’s Facebook page.

The rules of the club are there are no rules. Any member can place a painted rock anywhere they like around town. Many have found rocks in local shops or around the parks. Sometimes, the rocks even travel outside the town.

“People often have taken them on vacation to hide them,” Lisa said. “I hid a few in Europe. Someone from the Netherlands found one I left on the tube in London. They had never heard of rock painting, so that was pretty cool.”

With about 7,000 members, the club is still growing in the Southeast area.

“People are painting and hiding all the time,” Mark said. “With such a strong group and so much creativity, the club is very self-sustaining.”

“Me and my wife found one about a month ago and she took it downtown and re-hid it and posted it,” Mark said. “We are not doing as much of the painting and hiding anymore. There are still lots of people who are. It’ll stick around for a long time.”

Southeast junior Anna Ockel is a new member of the club who has found some painted rocks on campus.

“I have found a couple rocks outside of Magill, and then joined the Facebook page,” Ockel said.

Many connections are made from this club as well. Lisa mentioned one of her favorite connections made was from a woman named Billi Jo Knight and her mother Diann Knight.

Lisa said Billi Knight lost her battle to cancer but was very active in painting rocks around town.

“She made encouragement rocks to take and leave for people to pick up while they were at treatment,” Lisa said.

Members of the club make connections and enjoy the sharing of rock art on the page. There is no limit to an artistic skill, it is for anyone looking to grow more creativity in their life.

One of Mark’s favorite memories from the club occurred during the spring and summer of 2017.

“Just seeing so many people get so excited about painting rocks and hiding them, if you would have been around the area during that time you would have just been like ‘Holy cow, everyone in the city is doing this,’” Mark said.

The McEacherns are amazed by how much the club has brought out the artist in people.

“We have some amazing artists in our group and we had no idea that it would take off the way it did. I just love seeing people paint on rocks,” Mark said.

For more information about the club, visit the Facebook page “SEMO Rocks.”