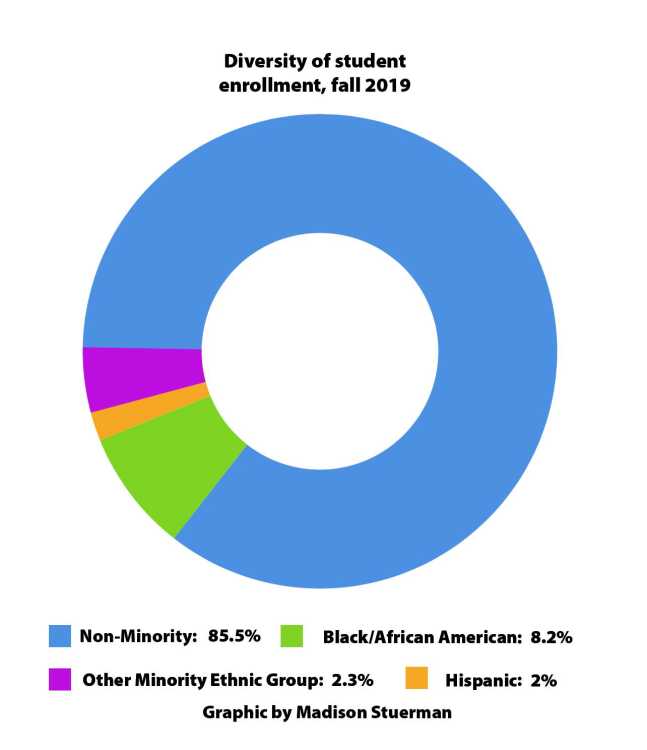 Minority groups make up 14.5% of Southeast enrollment, according to the university website.

Of these students, there are more than ten active organizations with a goal to introduce more culture to the Southeast community.

One of the most recent groups to officially form as a group is the African Student Organization (ASO) which was reinstated after a few years of being inactive.

Sophomore and ASO president Elvis Maina revived it because of the growing population of African students at Southeast.

“What we do is spread awareness about African culture, beliefs, and organize cookouts, get students to join, get involved, have fun,” Maina said.

This is not the only recent addition of cultural organizations on campus; this spring, the Muslim Student Association, or MSA, was brought to the Southeast community by current president Shadan Roumany and few other students.

“Some of the community members came to us and they were like ‘Do you want to start?’ and it was about three of us,” Roumany said. “We’ve grown from three to about 15-20, and in our group chat, we have 40 or 45 people. It’s slowly going up.”

One of the events held was about misconceptions of Islam and to try and break down some of the stereotypes that are given to the Muslim community.

One event the group held was last spring where a speaker spoke and then it was opened for discussion between attendees.

“During [the lecture] that it was like ‘I feel this way about Muslims’ and we were like ‘Oh we don’t do this and this is just a stereotype.’ I think making a presence on campus or just doing events and being on campus it helps.”

The Muslim Student Association has a ping pong tournament planned as a way to ignite those conversations between different cultures in a more creative way.

“Because I’ve been Muslim my whole life, I don’t know what someone who is meeting a Muslim feels like, so to me it’s nothing odd,” Roumany said. “But it’s just like playing ping pong, that’s so nonchalant right, so it’s initiating that fun time; then we’ll have that conversation that I’m just like you.”

The main goal of these organizations is to promote new cultures to other students at Southeast. The president of the Student Organization of Latinos, junior Jocey Reyes said their organization tries to promote more than just one type of Hispanic or Latino culture, as there are many cultures that tend to fall under Hispanic/Latino.

“Part of [the organization purpose] is to bring awareness that Latino/Hispanic is the overarching term but there are different races that goes along with that, and I feel that people tend to just group them together,” Reyes said.

Reyes explained members of their group come from all different walks of life, but they are all connected by their shared culture, whether they are those who classify as Hispanic/Latino or those who just enjoy the culture and want to experience more of it.

One of the events Reyes, Maina and Roumany all said their organizations are preparing for is Carpe Diem on Nov. 16.

Carpe Diem is an event held by Campus Life and Event Services which encourages the community to interact with those of a different culture than themselves.

“The more we spread awareness, the more we grow, so that’s what we are trying to do,” Maina said. “We are not limited to which students can join, like more organizations. You don’t have to be of African descent to join, anyone can; Hispanic, Asian descent or even American.”