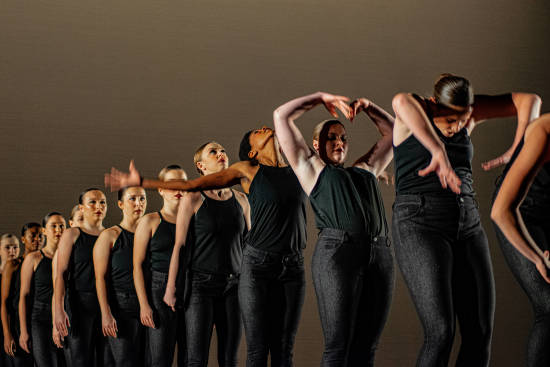 Southeast dance students flexed their skills in a multitude of dance styles at the annual Fall For Dance production at Southeast’s River Campus, which kicked off Nov. 14 and ran through Nov. 17.

The showcase consisted of two acts made up of five pieces in each act. The show offered a variety of dance styles such as an aerial performance and an original contemporary ballet piece by guest choreographer Kristopher Estes-Brown.

The dancers weren't the only students hard at work as members of the production staff assisted the show’s design as well. The technical crew designed background images and lights that complemented the pieces on the stage.

In “Rank and File,” the final performance, the background took on a pale orange hue with lines reminiscent of a palm tree silhouette. The costume build crew produced shirts for dancers with a gold tree-shaped design on the front to match the background.

Performers Nike Farmer, Alice Anders and Emma Knowlton spoke about the effort it takes to produce a diverse production. The Southeast sophomores discussed the effort required for certain styles of dance and the experience they gain by collaborating with choreographers and members of the production crew.

Farmer spoke about her performance in “Tides of Euphoria,” which was choreographed by Southeast senior Rachel Christophe. Farmer said the piece didn’t fall into a particular style of dance, but rather the purpose of the performance was to make the audience feel euphoric. 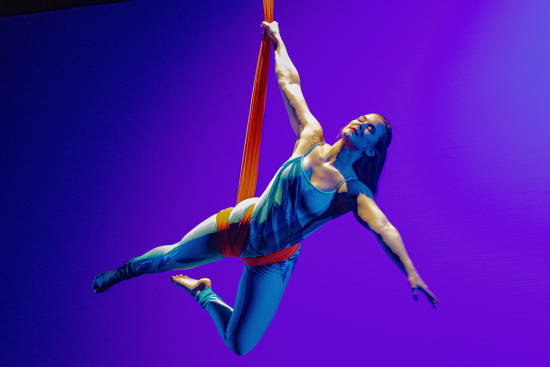 Bachelor of Fine Arts (BFA) dance major Anders choreographed a piece for the show, which she had to show to a faculty mentor twice before the audition. Associate Professor of Dance Hilary Peterson assisted Anders with collaborating with costume and lighting designers for the piece, which is titled “Spiralization.”

“The piece is about the relationship between the dancer and music, and in this case, the music is live so it's kind of special,” Anders said.

Casting for Fall For Dance started just after the fall semester began on Aug. 20. From there, the performers rehearse up to three times a week for two hours at a time. The week before the show is the most labor intensive. A week before opening night, the production crews get to see the performances.

After the crew watch, effects such as lighting and costumes are added to the pieces. The dancers have run the show from start to finish with full effects since Monday, Nov. 11.

The dancers start preparing for the show at 5:30 p.m. and must be ready two hours later. Preparation includes 45 minutes of warmups as well as time for hair, makeup and costumes.

Southeast sophomore Lane Hisel said he enjoyed every minute of the show. The musical theatre major spoke about the “incredible experience” performing arts majors get to have at Southeast.

“The students have an opportunity to truly showcase their talents by dancing for their peers and also their families,” Hisel said. “It's a preparation for the world that they're getting ready to be thrown into.”

Southeast freshman Zayaunna Brady spoke about her favorite parts of the show and the athleticism required for dancing.

“As main campus students, it’s good if we come out and support people who are musical theater majors or dance majors,” Brady said.

The Jeanine Larson Dobbins Conservatory of Theatre and Dance produced Fall For Dance at the Bedell Performance Hall. The next event on the calendar for Southeast’s dance students is the “Southeast Dance Project” on Dec. 6 and 7. For more information on mainstage and offstage performances, visit https://rivercampus.org/