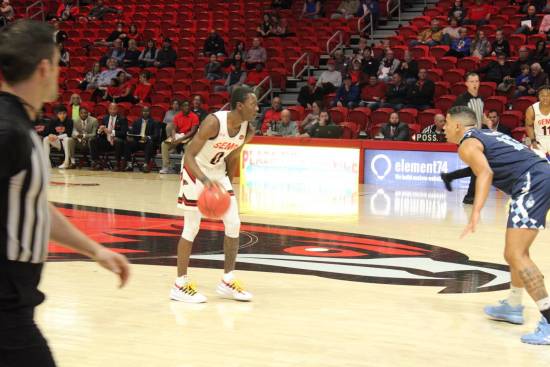 Sophomore guard Alex Caldwell dribbles up the court against Citadel on Nov. 20 at the Show Me Center.
Photo by Ramond Buck

The Southeast men’s basketball team fell to the Citadel Bulldogs 74-69 on Nov. 19 at the Show Me Center.

Fourteen first-half turnovers were key in the loss for Southeast. The Redhawks finished with 19 turnovers in the game.

Southeast found themselves down 40-32 at halftime as the Bulldogs made the Redhawks pay for their carelessness. The Bulldogs capitalized on Redhawk mistakes in the first half with 13 points off turnovers.

The Redhawks shot 4-for-21 from the 3-point line in the loss. Southeast coach Rick Ray said he was disappointed the team didn’t look to establish anything in the paint since they struggled from distance.

“We’ve got some capable guys inside and we will turn that down for a contested three,” Ray said.

Ray said he’s okay with his players taking the three, he just wants them to be good looks for the team.

“I don’t care about our guys shooting threes, but we just don’t want them to be contested threes,” Ray said.

Freshman guard DQ Nicholas led the way for Southeast with 24 points on 9-for-16 shooting from the field. The only other Southeast scorer in double figures was redshirt-senior guard Skyler Hogan. Hogan tallied 11 points on 5-for-11 shooting.

Southeast allowed the Bulldogs to shoot 11-for-25 from the 3-point line. Ray said a big part of the Bulldogs’ success was from lack of close outs.

“What we didn’t do was we didn’t close out,” Ray said. “I just thought we were like stagnant for some reason … At the end of the day our on-ball defense was not very good.”

Ray said he was unhappy with the fact his two primary ball handlers, Nicholas and sophomore guard Alex Caldwell, had the majority of Southeast’s turnovers.

With just over ten seconds remaining in regulation and Southeast trailing 72-69, Nicholas committed a traveling violation which wiped away Southeast’s chance to tie the game.

Ray said Nicholas was just trying to make a play.

“DQ was just trying to make a play and he’s been making plays the whole game,” Ray said. “As a freshman, he’ll learn from it.”

The loss moved Southeast to 1-2 overall on the young season.

The Redhawks are back in action at 6:30 p.m. on Nov. 22 when they host Missouri S&T. Following that game, Southeast will hit the road for nearly a month.