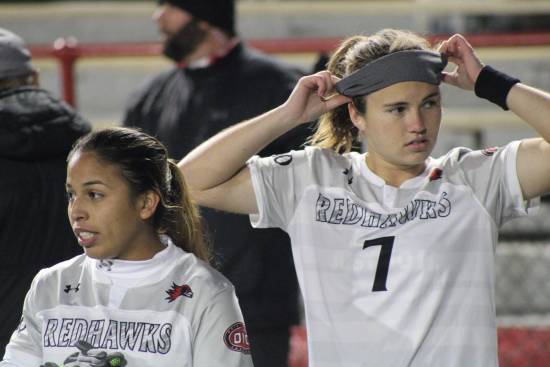 Senior midfielder Esmie Gonzales and freshman forward Hailey Block prepare for the start of the second half against SIUE on Nov. 8 at Houck Field.
Photo by Ramond Buck

Southeast soccer ended with an 11-5-1 record overall for the 2019 season finishing first in the Ohio Valley Conference regular season (8-1-1), a big step up from last years seventh seed position. The team improved its record from the 2018 season (5-8-5) by six wins and three less losses.

The Redhawks brought home five conference honors Thursday Nov. 8 at the Isle Casino Event Center in Cape Girardeau. Southeast coach Heather Nelson was named OVC Coach of the Year for the fifth time since she began at Southeast in 1999, more than any coach in the conference.

“That award, to me, is a complete reflection of my team, coaching staff and support staff,” Nelson said. “So I guess I don’t really like the title of it because it is a reflection of everything coming together.”

Freshman forward Hailey Block was named the 2019 OVC Freshman of the Year, only the fourth player in Southeast history to win such an award, last won by Kindra Lierz in 2014. Block also earned Second-Team and All-Newcomer Team accolades.

Nelson said the senior class helped guide the program back on the winning track.

“I think they’ll be extremely valuable to our classes under them for the fact that they’ve taken a lot of adversity that’s been thrown at them in their lives and taken something positive out of it and they are still here,” Nelson said. “They are grateful to be here and be a Division I athlete and to have their health to play this sport. Because of what they’ve been through, they don’t take anything for granted, and I think that is a wonderful way to live your life.”

Nelson believes the leadership will be lost and is a key part to be replaced as six seniors will graduate from the program in May 2020.

“Stepping into their shoes for the overall leadership and culture that they encouraged this year is going to be our biggest challenge because to me, that’s not just situational, it’s day in and day out of what’s happening on the field and the culture in the locker room,” Nelson said. “Those are human characteristics that really depend on people that are passionate about taking those roles.”

The offseason is Nelson’s favorite time of year because focusing on personal development is key in the preseason.

The Redhawks have 18 returning players for the 2020 season including four juniors, five sophomores and eight freshmen.