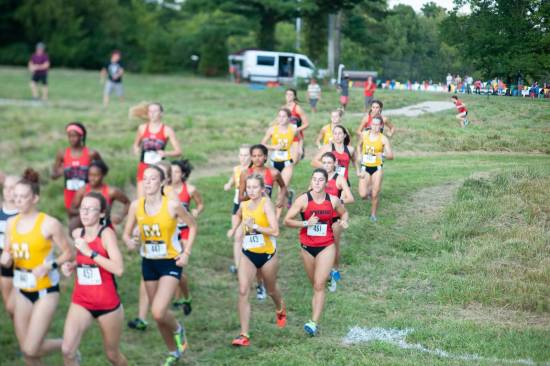 The Southeast women totaled 717 points for 27th in the team standings with sophomore Maddie Keller. The Redhawk men compiled a team score of 825 points for 27th and were led by freshman Caleb Cornelius.

“Of the top-five finishers for both our men’s and women’s team, 60% of them were first time collegiate runners,” Southeast coach Ryan Lane said.

Of those top finishers, Keller notched a team-best 78th place finish at the race. She did not expect to do that well after her knee flared up in the conference race on Saturday, November 2nd.

“The week of regionals I was really nervous,” Keller said, “After conference my knee flared up so I had to take a couple of days off. But when we arrived at the regionals meet, my team kept reminding me to do my best and helped me decide to just go for it.”

Keller said she is extremely grateful for the support of her teammates and even surprised Lane with how much stronger she came out this season.

“I knew she was going to get better, I just didn’t know how much better.” Lane said. “Her endurance was always lacking, but her speed was already there, so now that they are both developed I am excited to see what happens for her during track because that is a sport more tailored to speed rather than endurance.”

Lane has also strategized how he wants to move redshirt junior, Carli Knott, up for the indoor track season beginning early next month.

Knott said she has dropped her speed down two seconds and has a goal to qualify for her first national meet.

“Carli has dropped two and a half seconds in the 1500 that would qualify her to be a national full-time athlete,” Lane said. “And that’s what our super end goal is, there is no other option that she’s going to be a national athlete.”

“Everything in cross country did not go as perfect as I wanted, but I still grew a lot and am now more motivated for track season,” Knott said. “Without failure, you won’t know what success is.”

Lane is excited for his talented and young team to learn from this experience. He knows they will be able to help cultivate more points for the upcoming track and field meets, as well as improve on their finishes for the next cross country season.

Looking back at the season, Lane admitted that he was surprised to see that one of his highest male finishers was one of his hardest working, yet least talented runners. Junior Chris Durr has lead the team in four different meets this season.

“Chris Durr is a leader by example,” Lane said. “He shows that if you work really hard you can be incredible.”

Lane admires how hard Durr does everything the right way and when he is asked. He also believes Durr’s example is going to help lead a lot of the younger kids.

Durr, being one of the three returning juniors, is excited to have the other three freshmen and sophomores returning to the men’s team next year.

Southeast next turns to the track and field season as it opens its 2020 campaign Friday, Dec. 6, with an indoor dual meet against SIUE at the SEMO Rec Center in Cape Girardeau, Missouri.