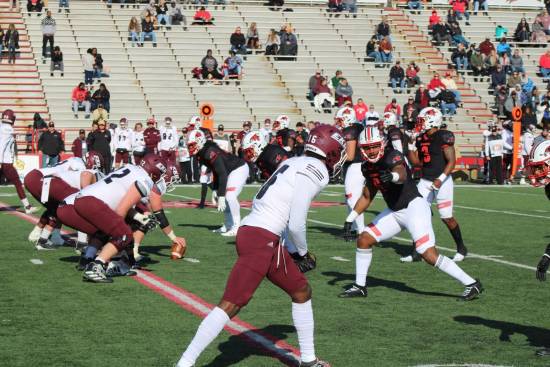 Senior linebacker Justin Swift (#3) lines up on defense against Eastern Kentucky on Nov. 8 at Houck Field.
Photo by Ramond Buck

Senior outside linebacker Justin Swift has been a vital piece of Southeast football’s success this season. Across 11 games, Swift has registered 78 tackles and 11 tackles for a loss to lead Southeast. Swift has been a big part of the defense all four years at Southeast, but it was during his junior year is when things began to take off. Swift started in all 13 games that season and had 114 tackles and 8.5 sacks during the 2018 campaign.

Swift credits his parents for introducing him to football.

“My parents put me in it, and I just fell in love with the game,” Swift said.

Swift credits his nine siblings for helping shape his competitiveness.

“We’re all competitive,” Swift said. “So they push me, we each push each other.”

Swift recalls it was at the high school level he realized he could play collegiately.

“I realized I was better than most of the players on my team,” Swift said.

During his senior season at Trezevant High School in Memphis, Swift had 148 tackles and two interceptions.

Swift said the location of Southeast was a big factor in his decision to continue his football and academic career at Southeast.

“It was one of the closest schools,” Swift said. “They were showing a lot of love to me, and I just love the campus.”

Outside linebackers coach Matt Martin said Swift is a complete player at the position.

According to Martin, Swift leads by example, and his work ethic is strong and reflects on the field on game day.

“The stuff you see on Saturday is stuff we see every day throughout the week,” Martin said.

Swift was named to the pre-season all Ohio Valley Conference team, but according to Martin, Swift has gotten even better.

“His play on the field play speaks for itself,” Martin said. “[He’s] just a situational football player, and he’s really grown this year.”

Swift has forced one fumble and has two quarterback hits this season.

Not only does Swift’s 11 tackles for a loss lead Southeast, those 11 tackles were for a combined loss of 40 yards, which also leads the Southeast defense.

Swift and the Redhawks could potentially be OVC co-champions with a win on Saturday, Nov. 23, when they host Murray State at 1 p.m. on Senior Day.