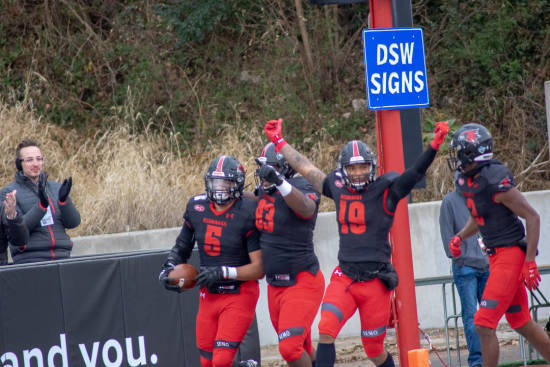 Inside Linebacker Zach Hall celebrating in the endzone after making a one-handed interception on Nov. 23 at Houck Field.
Photo by Jelani Days

Defense was the saving grace for the Southeast football team in its 31-24 Senior Day win over Murray State on Nov. 23. The win gave Southeast a share of the Ohio Valley Conference title with Austin Peay since both teams went 7-1 in OVC play.

Early in the fourth quarter, redshirt-senior quarterback Daniel Santacaterina connected with junior wide receiver Zack Smith for a touchdown to give Southeast a 31-24 lead.

Santacaterina said he couldn’t imagine his two years at Southeast being any better.

“It’s unbelievable, [I] can’t even put into words,” Santacaterina said. “We’ve accomplished so much as a team, and players and coaches and everybody around just put so much effort and time. We deserve this, we deserve it.”

Southeast coach Tom Matukewicz said Santacaterina is as mentally tough as anyone.

“He’s getting stitched up, he’s getting pulled, he’s getting yelled at, [and] articles are written,” Matukewicz said. “I’m just so thankful that he gets to leave here in the record books because I want everyone else to know what I know.”

“He catches well, he runs great routes,” Santacaterina said. “Because he’s not tall he’s one of those slot guys that [have] to get away from people and he does that well.”

With just over two minutes to play in the fourth quarter, the Redhawks led 31-24, and the Southeast offense was tasked with a fourth-and-one from the Murray State 32-yard line. A high snap led to a fumble and a loss of 16 yards.

The Racers took over from their own 48-yard line and the Southeast defense had to come up with one more stop, something they have done all season.

Five plays later, Santacaterina was back under center with the Redhawks in victory formation.

Senior inside linebacker Zach Hall gave the Redhawks their first lead of the afternoon when he found the endzone after intercepting a pass from Racers redshirt-sophomore quarterback Preston Rice early in the second quarter.

“He could rush a passer, he could stop the run, he could cover, then, pick-six,” Matukewicz said. “Most guys could only do two of those things.”

The Racers kicked off the scoring early in the first quarter when Rice rushed for a five-yard touchdown.

Redshirt-senior wide receiver Kristian Wilkerson evened the game at 10-10 near the halfway point of the second quarter.

Wilkerson added 11 receptions for 95 yards to go along with his one touchdown.

The Racers held a 24-17 lead at the half behind two touchdown passes from Rice.

“Once dead period hits is where you really try to reflect and enjoy it,” Matukewicz said.

The win closed out a 9-3 season for the Redhawks where they finished 7-1 in the OVC.

Because of a 28-24 loss to Austin Peay on Oct. 12, the Governors get the automatic bid to the FCS playoffs.