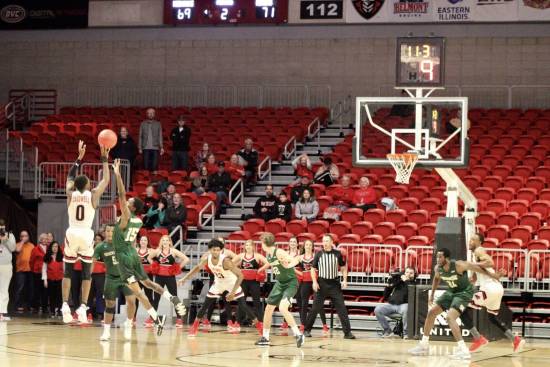 Sophomore guard Alex Caldwell shoots a 3-pointer against Missouri S&T on Nov. 22 at the Show Me Center.
Photo by Ramond Buck

With 17 seconds left in the game, sophomore guard Alex Caldwell nailed a 3-pointer to propel the Southeast men's basketball team over Missouri S&T 72-71 on Friday, Nov. 22.

Caldwell's late-game heroics began two plays prior when he made a contested layup to tie the game up 69-69 with 44 seconds left on the game clock, but the tie was broken on the next possession by the Miners. After Caldwell’s clutch 3-pointer, Missouri S&T stole the ball and gained one more possession but could not get the jumper to go for what would’ve been a game-winner.

Neither team led by more than seven points at any given moment in the game. The Redhawks have been no strangers to close contests this season as their last three games have been decided by a combined total of seven points. In that stretch, the team has gone 2-1, with their lone loss a 74-69 home loss to The Military College of South Carolina.

Although late-game heroics may have come from Caldwell, sophomore forward Sage Tolbert proved to be a force in the paint as he scored a team-high 16 points on 6-for-7 shooting along with nine rebounds. Thirteen of his points were scored in the first half.

Winning this game marks the Redhawks 29th consecutive victory over non-Division I opponents. Southeast closed a three-game homestand and begins an eight-game road series as they will participate in the Cable Car Classic in Santa Clara, California, starting Nov. 27.

The Redhawks will face California State-Fullerton to open, followed by Santa Clara (Nov. 29) and Denver (Nov. 30) in the round-robin tournament.