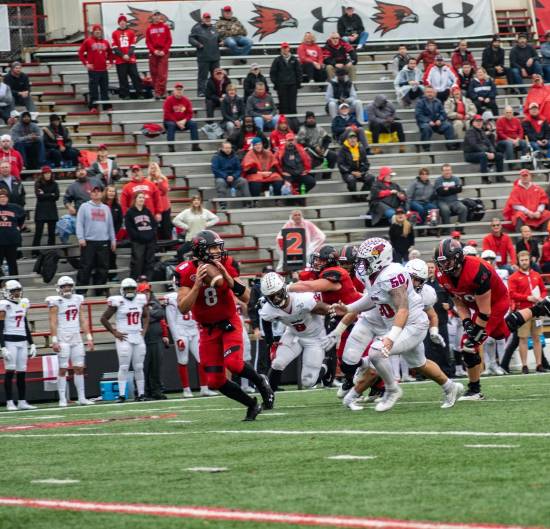 The inability to find the end zone cost the Southeast football team in its 24-6 loss to the Illinois State Redbirds in the first round of the Football Championship Subdivision playoffs on Saturday, Nov. 30.

The win for Illinois State moved them to 9-4 overall and they will advance to the second round of the FCS playoffs to play Central Arkansas. The Redhawks finished their season 9-4 overall and 7-1 in Ohio Valley Conference play.

Redshirt-senior quarterback Daniel Santacaterina did not start the game as he was battling a shoulder and foot injury. Southeast coach Tom Matukewicz made the decision to start sophomore quarterback Joe Pyle.

Matukewicz said despite Santacaterina wanting to start, the final decision was ultimately up to him.

“He was unable to run at practice,” Matukewicz said. “I just made the call based on the guy who was healthy.”

Santacaterina entered the game at the start of the second series in the second half despite battling injury.

Matukewicz praised Santacaterina’s toughness and the job he did in the second half.

“He did a great job,” Matukewicz said. “There’s no one tougher than Santa.”

Pyle finished the game 9-for-17 passing for 124 yards, while Santacaterina finished 8-for-13 passing for 81 yards.

Illinois State kicked off the scoring just under four minutes into the game courtesy of an 11-yard touchdown run from senior running back James Robinson.

Senior inside linebacker Zach Hall kept it simple when describing the issues Southeast had with stopping the Illinois State run game.

“They have a good running back, big offensive linemen, and they’re a well-coached team,” Hall said.

Robinson tallied 41 carries for 297 yards and a touchdown.

Redshirt-freshman quarterback Bryce Jefferson only threw the ball seven times in the win over Southeast. Jefferson was 4-for-7 including a 33-yard touchdown pass to extend the Redbirds lead to 21-3 in the second quarter.

Matukewicz said he is forever thankful for this senior class that is the winningest senior class in SEMO history.

“I have this gratitude to them because they came when we didn’t have any of this stuff and we didn’t have the kind of excitement that we have now,” Matukewicz said. “I told them afterwards I’m going to do everything I can to carry on their legacy.”

Hall said the biggest thing he learned in his four year run was to enjoy every moment.

“I never thought this day would come,” Hall said. “[I just learned to] enjoy my time with the people around me and make the most of every situation and opportunity.”

Redshirt-senior Kristian Wilkerson said the advice for the younger Redhawks would be to work hard and listen.

“Keep working hard and follow what the coaches tell you,” Wilkerson said. “They’re telling you right because they’ve built a great program.”

Wilkerson hauled in five receptions for 114 yards, including a 45-yard reception from Pyle.

Southeast will now look to re-tool as they are losing the winningest senior class in Southeast program history. 17 players will be lost to graduation and the majority played a huge role in the Redhawks’ success in the past four years.