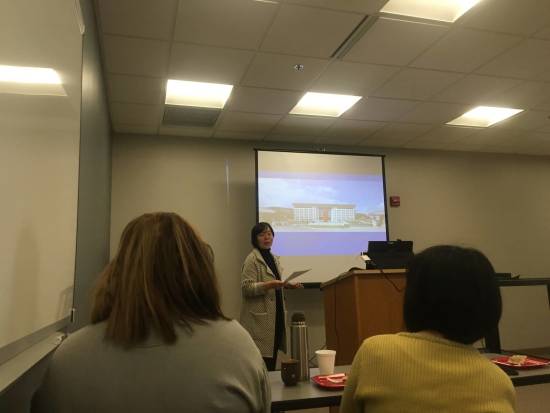 Chunxia Jia shares her experiences teaching at the University of Jinan to a crowd of faculty and students on Nov. 20 at the International Village.
Photo by Raymond

Two visiting scholars from China offered their perspectives on the differences and similarities between American and Chinese universities as a part of International Education Week at the International Village on Wednesday Nov. 20.

Enfu Li, from Fujian Normal University, discussed how universities in America and China have many similarities, but there are many differences between them as well.

Some of these smaller differences include how Chinese people generally do their laundry out in the open while Americans do not. The lack of hot water fountains in America and differences in dining were two other differences Li discussed.

Li said some bigger differences included the difference in free speech in American and Chinese universities.

The other visiting scholar was Chunxia Jia, a literature teacher from the University of Jinan. She also discussed differences between universities in China and America.

Jia noted differences in the size of the universities and amount of students living in dorms. In China, she said four students often share one room.

She also discussed how American universities seem to have a greater degree of freedom in teaching styles and engaging in classroom discussion.

When discussing the variety of teaching styles used in America, Jia said, “It’s a very good thing. The flexibility is very important.”

Christopher Rieger, an English professor at Southeast, thought the visiting scholars provided him with more insight into the teaching styles of both countries.

Rieger said, “The class sizes are much larger in China, so it is harder for them to do class discussion and things we take for granted.”

To learn more about other international events on campus, contact the International Village through email at international@semo.edu or through phone at 573-986-6863.