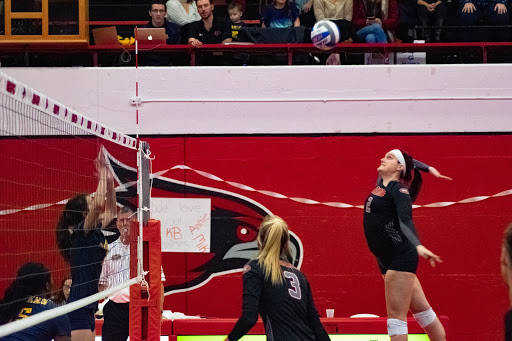 Annie Wehrheim (right) rises up for a spike against Murray State on Nov. 8 at Houck Field House.
Photo by Jelani Days

Redshirt-senior and right-side hitter Annie Wehrheim did not have the same college journey as most athletes.

She began her volleyball career when she was in fifth grade after finding out her favorite physical education teacher was the volleyball coach.

“It was something new my siblings never played and my P.E. teacher was the volleyball coach and I really liked her, so I wanted to play the sport that she coached,” Wehrheim said.

Wehrheim said she fell in love with the sport in her freshman year of high school, later than many other athletes.

“Freshman year was when I started to figure out how to play and actually hit the ball,” Wehrheim said.

Wehrheim has not always been a right-side hitter. In fact, she has played every hitting position in the sport at some point in her career. At Woodlawn Community High School, she was a middle hitter, and she became an outside hitter at her previous junior college, John A. Logan college, a public community college in Carterville, Illinois.

While she was there in 2015, Wehrheim received all-conference honors from Mid-West Athletic Conference. She built off of that even more and earned Conference Player of the Year and Region 24 Most Valuable Player in 2016 while also earning an All-American Honorable Mention.

After suffering an injury, Wehrheim redshirted her first year at Southeast, making her journey different than others. Southeast coach Julie Yankus believes this might have helped Wehrheim learn more about the game from a different perspective.

Although Wehrheim did not play her normal role, once the opportunity in a different position opened, she “took the role and ran with it.”

According to Yankus, the journey Wehrheim went through showed her versatility, ability and willingness to do whatever was necessary for the team.

“It was amazing to see,” Yankus said. “I really have not seen that in a player in a really long time.”

Wehrheim went on to receive all-conference honors in a position she didn’t expect to play.

Yankus said Wehrheim has always been someone she feels confident in and that is something that will be missed next season.

“She has definitely been a go-to performer under pressure,” Yankus said. “I know that she’s willing to swing and be aggressive and go for it.”

In her first season as a Redhawk in 2018, Wehrheim recorded 204 kills, 33 digs and 17 total blocks. Wehrheim was named to the Second-Team All-Ohio Valley Conference Team and also to the OVC Commissioner’s Honor Roll.

Through the 2019 regular season and OVC tournament, Wehrheim has recorded 272 kills and 51 digs and one block.

Wehrheim said she will miss playing the game and playing with her teammates.

“We are more of a family,” Wehrheim said of her team.

The Redhawks’ season came to a close when they lost to No. 9 University of Kentucky in three sets in the opening round of the 2019 NCAA Women’s Volleyball Championship on Friday, Dec. 6.