For Redhawk Rhythm A Cappella group, memories were made this semester 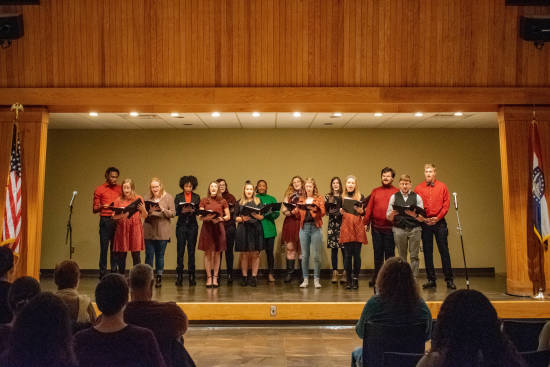 Redhawk Rhythm A Cappella Singers performing Christmas songs at their holiday concert on stage in the University Ballroom on Dec. 3.
Photo by Jelani Days

For Redhawk Rhythm A Cappella group, memories were made this semester.

Not only is this the group’s first year, and first live performance, they have also been selected to compete in the International Championship of Collegiate A Cappella in Springfield, Missouri in February 2020.

Southeast junior Becca Peach is the president and founder of the group. With seven years of experience and a passion for singing, she decided to take her talents even further.

Starting this group was something new for Peach, and she wanted to have a group where she could keep singing.

“Several of my friends from high school went to college and they were in a cappella groups and one of them was the president of his a cappella group,” Peach said. “His group got to go to the ICCA’s, and I just wanted to do something like that. So, I started this group to do just that.”

The process to take the idea and build the dream of finally making the group a reality took some time and effort.

“Starting this club has been about a year in the works or up in the process for about a year now,” Peach said.

Over time, Peach mentioned many steps were involved, such as making a constitution, and finding the right people, including an adviser and students to be on the executive board.

The group has a total of 15 members, and it’s important to take into account how the music is chosen and what parts are needed for each person.

“As of right now, we don’t have very many tenors and basses, especially in comparison with our higher voice parts,” Peach said. “We also don’t have a vocal percussionist. We have to take those things into consideration when choosing our music.”

Peach said one issue the club has run into is whether to purchase four-part music or two-part music, and have the lower voice parts sing down an octave

As this group is still getting off the ground, Peach mentioned how easy it is to make memories with the group.

“I think that my favorite memory so far this semester was the first time that I realized that, ‘Hey, we’re actually pretty good,’” Peach said. “We were preparing our audition and we sang our song all the way through and it just kind of hit me that we have a chance to compete and to go really far. That was a really awesome moment.”

The ICCA’s are a competition for college-level students to sing a cappella in groups and compete against other schools.

“I was really hoping that we would get into the ICCA’s, but I didn’t want to get my hopes up too high,” Peach said. “Thankfully we were accepted to compete in this competition.”

This year the ICCA’s will be held at Missouri State University in Springfield, Missouri.

As this is the group’s first year, the competition will be a new experience for the entire group.

“I’m mostly looking forward to being able to bond with the group and get to know them a little better,” Peach said. “We’ve got a little road trip ahead of us so I’m kind of excited for that and obviously I’m pretty excited to compete as well.”

Along with a successful semester, the group had their first concert Dec. 3 with a holiday theme. Many holiday songs were sung as a group while there were also individual groups who sung together.

A cappella singer and sophomore Chad Beatty said he has enjoyed being a member of the group this fall semester.

“The best times are when we have time to not really stress about music but have time to talk about how things are going and discussing future plans for the group,” Beatty said.

For more information about the group or their journey to the ICCA’s, visit its Facebook page Redhawk Rhythm.