Redhawks defeat SIU with the return of Tesia Thompson 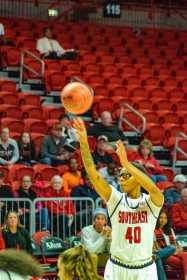 Junior forward Latrese Saine shooting a free throw against Evansville on Nov. 10 at the Show Me Center.
Photo by Jelani Days

Junior guard Tesia Thompson returned to the court after missing the prior three games with a concussion. She led the team in scoring with 16 points and added nine rebounds.

“[Thompson] was able to practice the last two days and got cleared to play, so whenever she’s on the court with us it always gives us confidence because she makes us better,” Patterson said. “As far as the balanced scoring goes, we had to play without Tesia for a while so we were able to stay confident in our other players ability to score as well.”

The Redhawks bench provided a scoring boost as the reserve unit scored 47 in the game. Southeast’s defense held tight as well. Southeast held the Salukis leading scorer Nicole Martin (14.7 PPG) to seven points on the night. Saine, who was Martin’s primary defensive assignment throughout the night, finished the game with 12 points and nine rebounds. She spoke about her emphasis on defense and the teams play on the night.

“If you work hard on defense, offense will come … I caught myself in previous games playing for blocks instead of great defense so the coaches just told me to wall up and my height will affect the shots being taken. [SIU] beat St. Louis University and Eastern Kentucky so we knew we had to play hard and be the aggressor, playing hard and with chemistry is what kept us together,” Saine said.

Looking ahead, the Redhawks are approaching finals week and they are taking it just as serious as any basketball game they’ve played all season.

“Our young ladies are going to focus on academics with it being finals, they’ll have a couple of days off and then we’ll do a small group workout in a few days. As said by Rocky Balboa in the movie Creed, the biggest enemy is the one looking back at you in the mirror, so we’re going to focus on us while getting prepared for the next game,” Patterson said.

Southeast is now 3-0 at the Show Me Center this year and will look to improve on their record with a three game road trip, starting against Ole Miss on Dec. 14 in Oxford, Mississippi.