All Rhodes lead to somewhere 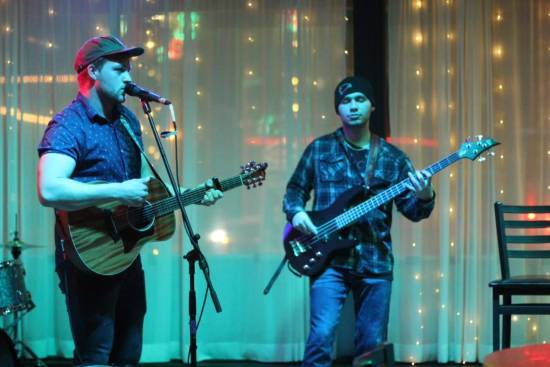 When it comes to local music, Cape Girardeau is not short on talent.

A new duo has added their name to the scene. Seniors Dylan Rainbolt and Christian Prost, otherwise known as House of Rhodes, are a local band.

The original duo formed after they bonded while driving to and from an assistant student teaching position in Ste Genevieve, Missouri. They soon came up with the idea to start singing at open mic nights at local venues.

Their first gig was at STA in Cape. After that, they began playing regularly at downtown venues Port Cape Girardeau Restaurant and Lounge and Shakers Bar.

Rainbolt and Prost’s instruments of choice are the acoustic and bass guitars, respectively, and even though it is only the two of them, they try to give their audience the feeling of a full band.

“We’ve actually tried to be pretty creative for most of our shows because with only two guys you can’t really get the whole band vibe, but we try to give it that,” Rainbolt said.

Both students play multiple instruments, and they sometimes also collaborate with a friend from Missouri State University who sits in on the drums. Prost said that playing without a drummer is not about having rhythm but giving the crowd the right feel for the right venue.

“We play really well together, but there is something different between playing with a big crowd with drums,” Prost said. “Then there is playing in front of a small crowd and it’s private with just two guys and an acoustic type.”

The duo has performed at venues outside of Cape as well, including the Wolf Cafe in St. Louis and Picasso’s Cafe in St. Charles, Missouri. They even went on a mini tour in Nashville, Tennessee, over a weekend in mid-December.

Both plan to graduate in May 2020, but even after they leave Southeast, they don’t have plans to leave behind their duo. They’ve even talked about doing a tour.

Both agree they have had a bond since their first performance last May.

“We’ll be practicing a new song, and when I bring it to him, he’ll just knows exactly what I’m thinking,” Rainbolt said. “We just bond.”

Rainbolt and Prost came up with the name for their band while driving, similar to how they decided to perform together. They got their name from the gas station/convenience store Rhodes 101 which they saw often on their constant drive.

In February and March, the band has performances planned in Cape and St. Louis. For more information, find House of Rhodes on Instagram, @houseofrhodes.