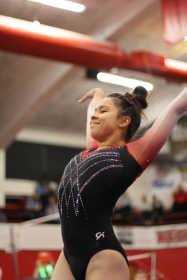 Anna Kaziska sticks her landing during a home meet in the Parker Gym.
Photo by Kate Marshall

Coming off of a winless 2019 season, the Southeast gymnastics team had nowhere to go but up entering the new decade. In the first meet of the season, the Redhawks beat their 2019 season-high point total with a score of 191.275 at a tri-meet with Missouri and Illinois. The team's best match of the year came in the Midwest Independent Conference Championships with a score of 190.275.

Southeast coach Ashley Lawson said a big reason for the team’s immediate improvement is its depth.

“Last year, we only had 13 athletes on the team and only eight were capable of doing gymnastics,” Lawson said. “This year we have 19, so we have depth that we didn’t have last year.”

As the team has grown, Lawson has ramped up the intensity of team training sessions.

“We asked the team what they wanted to see change, and they all agreed they wanted harder conditioning,” Lawson said. “We do sprint work, we swim, sports-specific conditioning, and every floor day, we have a cardio floor routine they have to complete.”

“Ashley Albrecht is our quiet leader,” Lawson said. “She speaks with a wealth of knowledge, she’s got a championship background and she has qualified for all the things this team wants to qualify for.”

At UIC, Albrecht was a key component in the Flames finish as USA Gymnastics National Runners-up. Individually, she earned Second-Team All-MIC Honors.

Although the team is mostly comprised of underclassmen, Lawson said they have experience and confidence beyond their years.

“Dahlia Solorzano-Caruso has a lot of international experience, and I think it keeps her calm at times when a less experienced freshman may get nervous,” Lawson said. “Our all-arounders are all underclassmen and they all feed off of each other.”

Solorzano-Caruso, Maxwell and sophomore Anna Kaziska are the all-around gymnasts for the Redhawks.

Lawson said she expects Kaziska to find herself at the National Championships again.

“I think it’s a goal of hers to be a first-place finisher in some event,” Lawson said. “I think [going to the National Championships] was a great experience for her and one that she was really nervous about. I think she is more composed this year after having a year under her belt.”

Lawson said with all the changes in the offseason, the team mindset has changed, as well.

“They’ve set team goals like getting a 190 at every meet and they make weekly goals as well,” Lawson said. “They have all bought in and everyone is 100% on board and they want to put SEMO back on the map.”