Southeast to bring sounds from Italy to Cape Girardeau 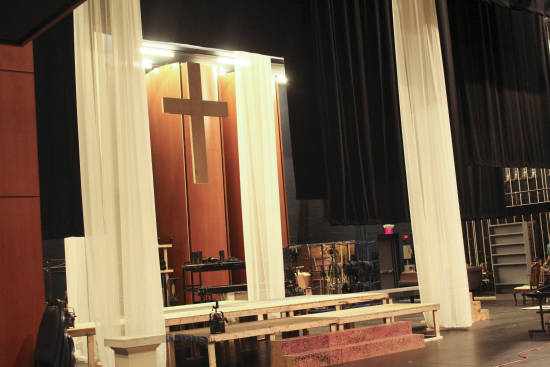 The stage set up for Suor Angelica, the first act of the show as it is set in a Covent. Bedell Performance Hall on Jan. 16, 2020.

Southeast’s Opera Workshop along with the Department of Music will present two one-act operas from Italian composer Giacomo Puccini, incorporating multiple art forms at once.

The two shows are Suor Angelica, a drama, and Gianni Schicchi, a comedy.

Christopher Goeke, Southeast professor of music and the show director, said working on the show has been a blast, and he hopes the audience sees the amount of hard work the cast and crew have put into it.

“It’s a lot of work but it’s a labor of love — I think the students feel the same way,” Goeke said. “It’s one of those things where we want students to understand how accessible [opera] really is.”

Both lead roles of Suor Angelica and Gianni Schicchi are played by guest performers, but the remaining cast members are current Southeast students or faculty, including the orchestra and the stage crew.

The two operas were originally part of a trio of one-act operas, but Goeke decided to perform only two because he believes the show to be more enjoyable for the audience.

“It’s an amazing way to tell stories —it’s really fun,” Goeke said. “I think they’ll be surprised at how much they get out of it, both the comedy and drama, just hearing the music and seeing our students up there doing this.”

Freshman Mackenzie Barger, a performer in Suor Angelica, said the show is similar to watching your favorite TV soap opera, but set to opera music.

The cast and crew will put on a closed matinee performance for area school kids on Thursday during the school day, as they have for the past five years. Goeke said each year he is shocked at how much the kids get out of the performance.

“What always surprises me is that these area school kids, usually about third grade to high school, they love it,” Goeke said. “We’ve done stuff in French, English and German, and they have always loved it; they eat it up.”

The operas will be performed Jan. 31 and Feb. 1 at 7:30 p.m. in the Bedell Performance Hall on the River Campus, and tickets can be bought online at rivercampus.org.