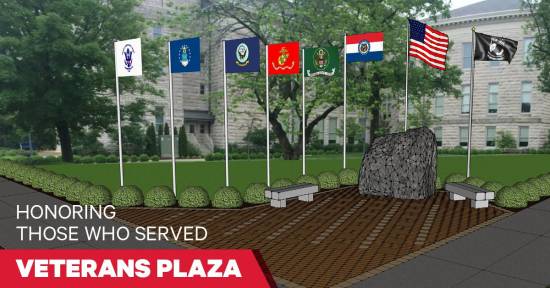 Southeast artist rendering showing the plans for the plaza. Construction to being over Spring Break and to be finished by May 1.
Photo submitted by Trudy Lee

Construction will soon begin on Veterans Plaza after two years of planning and fundraising.

Originally started by Tom Meyer, a former member of the Board of Regents, along with the Vet Corps Alumni Association chapter at Southeast, the project is making its way making its way to completion.

Trudy Lee, interim vice president for university advancement and executive director of the University Foundation, said while this is a place to honor veterans, it is also meant to be a space for all students to appreciate.

“The idea has been for it to be a really nice space for students as they’re walking across campus to just stop and reflect or chill out and enjoy the plaza,” Lee said.

The space is designed with flag poles that will fly the Missouri state flag, the United States flag, and the Prisoner of War flag. There will also be flags to honor the five branches of the military — the Army, Air Force, Navy, Marine Corps and Coast Guard. The plaza will also have two dedicated benches so visitors can relax and enjoy the space.

Amanda Lincoln, director of development of University Foundation, said this is veterans’ way of paying back Southeast for giving them the feeling of inclusiveness, a good foundation and education they needed after returning home from Vietnam.

“By being able to thank the university for welcoming them after a very difficult time, and to want for all students, future, past and present who are veterans to know that this is a space that appreciates the service and sacrifice of them,” Lincoln said.

The plaza will be located behind Academic Hall, facing the parking lot and Memorial Hall. It will be paved with personalized bricks for veterans, some donated by donors and others purchased by friends or family of a veteran.

Not all the bricks are from alumni; anyone with connections to Southeast can purchase a brick to honor the service of a veteran. Lincoln is a staff member but had one dedicated to her father.

“My father made it possible for me to come to Southeast, and his service was a big part of that, and so that is a way for me to say thank you to him,” Lincoln said.

The plaza is designed so each year around Homecoming new bricks can be added, with the next set of bricks to be laid this year.

Lee said they plan to start building the plaza during spring break while students are away so it can be finished for the official dedication May 1.

The current order for bricks is over, but money can still be donated for a personalized brick that will be laid during homecoming. Visit semo.edu/veteransplaza for more information.