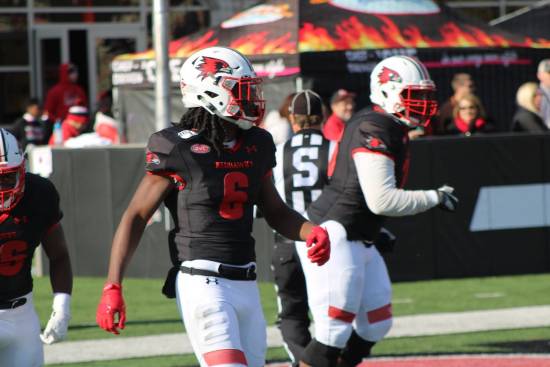 Kristian Wilkerson leaves the endzone after scoring a touchdown against Eastern Kentucky on Nov. 8 at Houck Field.
Photo by Ramond Buck

The Seventeen Seniors on the Southeast football team are leaving behind a successful 9-4 season and a winning culture for future players to follow.

Southeast coach Tom Matukewicz was introduced as head coach Dec. 18, 2013. After four straight under .500 seasons, things began to turn around in 2018 for Southeast football.

Southeast went 9-4 during the 2018 campaign and Southeast earned a spot in the Football Championship Subdivision Playoffs where the team defeated the Stony Brook Seawolves 28-14 in the first round earning the first FCS Playoff win in program history.

Matukewicz said the expectation for this class was to turn the program around.

“A lot of those guys that were in that class came from winning programs,” Matukewicz said. “The plan was to turn the program around, win a bunch of games [and] championships.”

Matukewicz commends the seniors for continuing to work hard despite not seeing early results.

“For several years, we were working really hard and not getting any results, so you start questioning everything,” Matukewicz said. “The thing that that group of guys did is they just kept showing up every day, and our best players were our hardest workers.”

Matukewicz said one of the biggest reasons the team was successful was because of how close the group of seniors was.

“When you have a team that deeply cares about each other, man it is a powerful force,” Matukewicz said. “Because of our culture, because of the relationships on the team, we were able to pull through all those fourth quarters.”

Senior inside linebacker Zach Hall agreed the unbreakable bond the seniors created was a big part of their success.

“We just didn’t call each other brothers, we actually were [brothers],” Hall said. “We spent a lot of time together outside of football.”

Southeast earned another berth to the FCS Playoffs when they won a share of the Ohio Valley Conference Championship in the 2019 season. Southeast fell to the Illinois State Redbirds in the first round by a score of 24-6. Seniors Kristian Wilkerson, Zach Hall and Elijah Swehla were named First-Team All-OVC. Senior Justin Swift was named Second-Team All-OVC.

Hall also credits Matukewicz for teaching him lessons outside of football.

“He taught me how to do things the right way and how to go about my business in everything. Not just football, but in life,” Hall said.

Matukewicz said the seniors bought into what the coaching staff wanted early and did a good job of getting the underclassmen on board when the coaches weren’t around.

“They really bought into who we’re trying to be on a daily basis,” Matukewicz said.

Matukewicz credited Hall and Wilkerson for how good they were at their position.

“Both Zach Hall and Kristian Wilkerson at their position [are some] of the most dominant players in history at SEMO,” Matukewicz said. “What people don’t see is all the hard work they put in when no one else was out there. They were literally the hardest working team. They worked before we even saw them at practice. They had already worked, they had already watched film. They just bought into what it takes to be great.”

“We need to learn from last year. Like, why did we win? Why did we have success?” Matukewicz said. “That starts now. We can’t wait ‘til August to start the culture [and] the building process.”

Hall said he is currently in Nashville, Tennessee, training for his pro day and for an invite to the upcoming NFL Draft Combine. The combine runs from Feb. 23 to March 1.

“Hopefully I can play football again, and if not, I want to be a college coach,” Hall said.

Southeast will look to fill the void these 17 seniors left as they get the 2020 campaign underway in the fall. Southeast signed 15 players on the first day of signing period on Dec. 18.