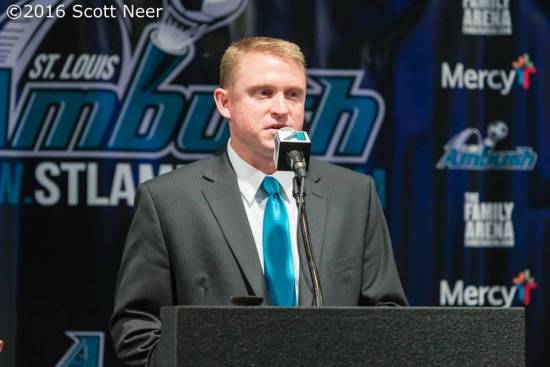 *Editors note: Story has been updated for further clarification*

St. Louis Ambush General Manager Brian Roth never played soccer in his childhood, yet he has helped found the Kansas City Comets, the St. Louis Ambush and took part when the Comets helped to start the National Women’s Soccer League since his graduation from Southeast in 2000.

Roth grew up in the town of Chester, Illinois, which is most famous for being the home of the fictional Popeye the Sailor Man. Before attending Southeast, he was certain he would go to college to become a high school band director.

“After graduating high school, I really thought it would be my music that gave me a career,” Roth said. “After about two years of music classes, I realized what I really loved was sports.”

Roth’s love for soccer came from watching the St. Louis Steamers indoor soccer team on television and in person.

Roth switched his major to recreation management, and after receiving his degree, he began an internship with the first iteration of the St. Louis Ambush. During his internship, the Ambush was forced to cease operations due to a contract dispute with the stadium they played in.

With his recreation management degree in tow, Roth was able to move to Perryville, Missouri, where he became the director of leagues and fitness for the city for seven years.

“I really enjoyed that,” Roth said. “If I was ever forced to leave soccer, I would get back into recreation.”

During Roth’s free time he continued to embrace his love of soccer by driving out to Kansas City to watch the Wizards play at Arrowhead Stadium.

While in Kansas City, Roth gave his resume to the director of marketing and communications for the Wizards and said, “If there is ever an opening with the team, let me know.” A week later Roth was offered a job with the Wizards for whom he worked from 2007 to 2010.

In 2010, Roth aided in the creation of the Kansas City Comets, the first of three professional soccer organizations he would help conceive.

Toward the end of Roth’s three-year tenure with the Comets, the organization helped to start the NWSL. The NWSL is the highest level of professional women’s soccer in the United States, and the 2019 U.S. Women's World Cup team was made up entirely of NWSL players.

In May 2013, Roth moved on from the NWSL and the Comets to bring back the Ambush after its 13-year absence. The announcement of the refounding came during an exciting time for soccer in St. Louis.

“We were in the middle of a big soccer buzz in St. Louis,” Roth said. “But there wasn’t any pro soccer happening, so it was a great time to bring back the Ambush.”

As general manager of the Ambush, Roth’s main job during the season is selling tickets and helping to keep all of the behind the scenes affairs in check.

“Our job is to make sure it’s a great fan experience,” Roth said.

Professional soccer is not the only area in which Roth has made a name for himself. Since his graduation from Southeast, he has been a massive supporter of the athletics program, even going so far as to be a public address announcer for the soccer and football teams.

“I got close to some of the teams and coaches, and I still stay in touch with the soccer coach, Heather Nelson,” Roth said.

While Roth was in Kansas City, he realized if he wanted to voice his opinion on Southeast athletics, he would need to “put his money where his mouth is.” Around that time Roth joined the Southeast Missouri Booster Club to support the Department of Athletics.

“I’m not going to be one of those [fans] that's going to stand there and complain if I’m not doing anything about it,” Roth said. “I give what I can and I try to give more and more every year.”

Roth can be found at Southeast athletics throughout the year and at the Family Arena in St. Louis during the Ambush soccer season.