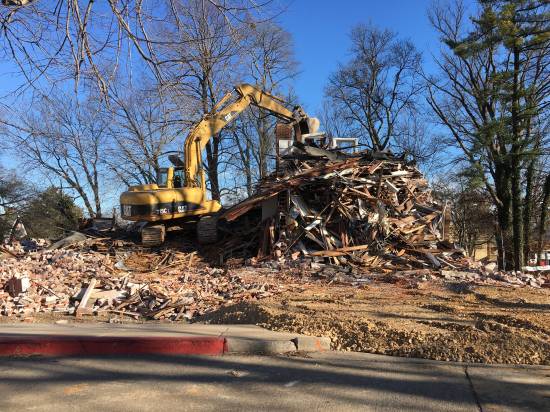 An excavator strikes the remaining structure of the former International Center at 939 College Hill Place on Jan. 7.
Photo by Brooke Holford

After serving as the hub for International Education Services and the Intensive English Program for 37 years, the house at 939 College Hill Place was demolished during winter break over a three-week period at the beginning of January.

The building has been empty since April 17, 2019, when the university officially opened the International Village next to the Towers Complex on North Sprigg Street.

Built in 1938, the building was purchased by the university in 1983 to be used as the international center.

Used mostly as an office building, the house “didn’t provide a good functional use” to the international community according to Kathy Mangels, vice president for finance and administration.

Demolition of the house was part of Southeast’s Facilities Master Plan, which began in 2016. After plans were put in place for the International Village to be built in 2017, the university planned to move International Education out of the house on College Hill Place. There was no use for the house once the village construction was completed, Mangels said.

“It was a house that we were trying to use as an office building and that only works so well,” Mangels said. “You make it work, but it's not ideal. It was an old house that had a lot of maintenance issues, so we knew we needed to relocate to give them the space they need.”

Director of University Communication Ann Hayes said the building served its purpose for 37 years, and the International Village will serve that same purpose in a much more comprehensive way.

“The Intensive English Program was housed in Pacific Hall and the International Center housed the international department program, and those two have now been merged,” said Angela Meyer, director of Facilities Management.

The demolition cost the university $19,400 and was done by Kucera Demolition out of Jackson, Missouri. Part of that cost was to reroute utility lines that went through the building, Mangels said. Hayes said “the house could not be razed until this relocation of utilities occurred.”

Meyer said the immediate plan for the space is to be used as a “green space,” and additional parking is also in discussion. She said two items “on the high priority list” included an energy master plan.

“There are a couple different options that have been discussed, but at this particular time, it’s just going to be a green space for now,” Meyer said.

Another option, Meyer said, is to identify a location for a south chiller plant as part of the integrated energy master plan.

“That is an option as well. And those are kind of the two that have been on the high priority list.”

A chiller plant is a centralized system that cools the air for a building or for a collection of buildings and provides the air-conditioning portion of HVAC systems.

Mangels said although there are other buildings not being used at this time, there are no scheduled demolitions in the immediate future.