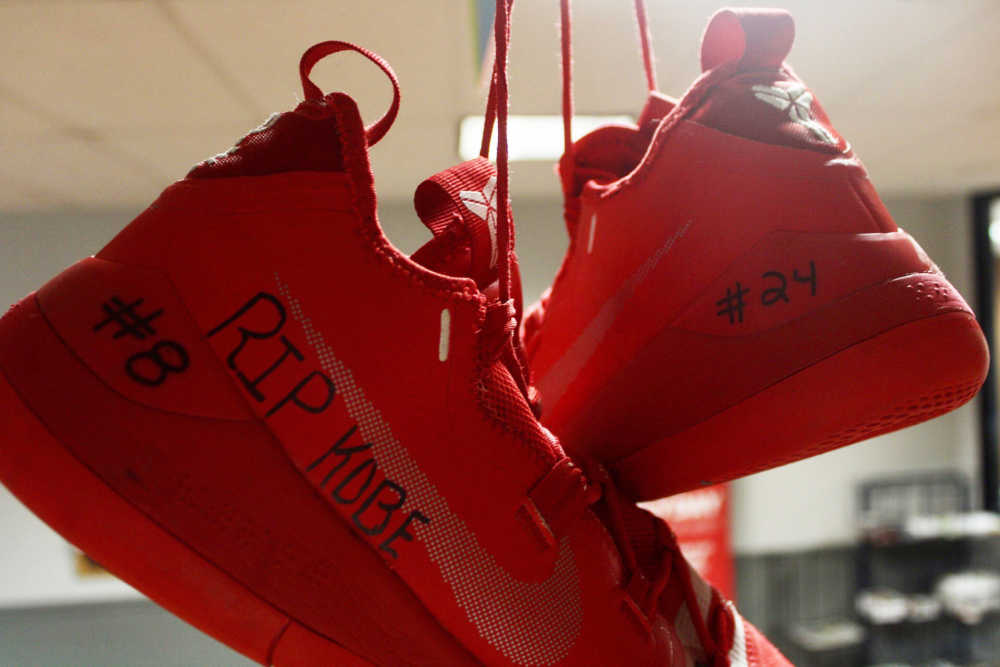 A pair of Kobe A.D. basketball shoes hang from a sign in Towers Complex with "RIP KOBE," and the numbers 8 and 24 written on the shoe. Los Angeles Lakers superstar Kobe Bryant, who wore both numbers for 10 years each, died Sunday in a helicopter accident in Calabasas, California.
Photo illustration by Ramond Buck

Longtime Los Angeles Lakers superstar Kobe Bryant and his 13-year-old daughter Gianna died Sunday in Calabasas, California, when Bryant’s helicopter crashed on its way to Gianna’s travel basketball game, TMZ first reported. According to the flight manifest, there were nine people on board the helicopter, including another player and parent.

According to the Los Angeles County Sheriff’s Department, there were no survivors.

Bryant was widely regarded as one of the greatest basketball players of all time, and Warriors coach Steve Kerr famously lauded him as “the closest thing to Michael Jordan.”

Bryant’s accolades cross decades, and his drive and work ethic span generations. His “Mamba Mentality” is still talked about four years after his retirement in 2016.

He was an All-Star 18 out of his 20 seasons in the National Basketball Association, a five-time NBA champion, the NBA’s Most Valuable Player in 2008, a four-time All-Star Game MVP, twice an Olympic gold medalist, twice a scoring champion and a Slam Dunk Contest champion.

Bryant scored 33,643 points in his storied career, all with the Los Angeles Lakers. Current Lakers superstar LeBron James passed Bryant on the all-time scoring list the night before he died.

This week marked the 14-year anniversary of Bryant’s 81-point game against the Toronto Raptors, the second-most points in a single game behind fellow Lakers superstar Wilt Chamberlain.

Bryant was a nominee for the Naismith Memorial Basketball Hall of Fame for the first time this year.

Bryant was an advocate for gender equality, and a huge supporter of the Women’s National Basketball Association. Last week, he suggested in an interview with CNN that three current WNBA players could play in the NBA today.

His second-oldest daughter, Gianna, had dreams to play in the WNBA he said on Jimmy Kimmel Live in 2018.

On Nov. 29, 2015, Bryant penned a letter to The Players’ Tribune titled “Dear Basketball.” The letter dove into Bryant’s obsessive love for the game of basketball and broke down why he gave 100% effort every play. In the letter, Bryant announced his retirement from the game.

The letter was adapted into a short film, with actor Morgan Freeman reading the letter like a poem. Bryant went on to win an Oscar for Best Animated Short in 2018.

His short film was just one small of his post-retirement ventures. Bryant was transitioning into becoming an entertainment mogul, producing “Dear Basketball,” writing several books and launching a media company.

Bryant authored a basketball memoir titled “The Mamba Mentality: How I Play,” before launching a young adult series with author Wesley King, called “The Wizenard Series.” The series is a mix of Harry Potter-type fantasy and traditional sports, according to USA Today.

Dozens of athletes and celebrities alike took to social media to express their grief over the news of Bryant’s passing.

Former teammate Derek Fisher tweeted on Sunday, “Struggling to process what is now a reality. Kobe’s life after basketball was just beginning and his second act was going to be even greater. His legacy, Gigi’s legacy both will live on forever!”