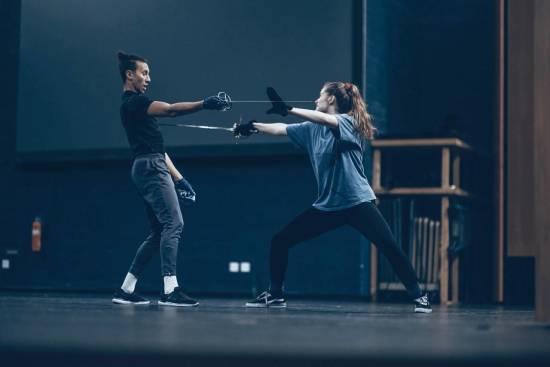 The 2019 Dueling Arts International Scholarship was awarded to Southeast senior Alex Burke and junior Corie Williams, both members of the Bachelor of Fine Arts acting program at Southeast River Campus.

Dueling Arts International is a not-for-profit organization that provides classes to train performers, teachers and directors in the art of theatre and on-stage combat performance.

The organization hosts workshops supplying teaching opportunities for aspiring stage combat directors as well as on stage actors to further develop their performance and fighting skills for the stage, film or television.

Some of the specific scene skills offered in these workshops include broadsword dueling and knife fighting, performances that require the use of an actual weapon or armor, as well as unarmed theatrical combat and Tai chi which center on the physical movement and rhythm of combat scenes.

Williams explained stage combat is about more than fighting and using weapons.

“The biggest misconception people have about stage combat is that it’s just fencing,” Williams said. “It’s about movement, creating an immersive stage experience and telling the story through combat.”

At the winter workshop, Burke and Williams learned about different fighting styles, weaponry and armor as well the historical context of fights, where they originated and how they apply to different performances.

Burke and Williams were influenced to apply for the scholarship after recommendations from the previous summer intensive class instructors as well as word of mouth by professors in Southeast’s BFA acting program.

Williams explained their teamwork and work ethic was what helped them when it came to earning the scholarships.

“We know we work well together, but I think that teachers saw the potential in us to elevate other people rather than just be selfish,” Williams said. “We want everyone to be as good as possible.”

Burke and Williams also explained they were able to further share their new combat skills in last semester’s rendition of “The Three Musketeers” at Southeast.

“Not only did that help reinforce and apply our experience, but we also were able to help teach other cast members what we had learned over the course of our time there,” Burke said.

Even though Burke and Williams are both acting majors, they explain these workshops are open for anyone committed to growing a new skill set.

“I think the community is just really safe and inviting,” Burke said. “It really makes you realize your own strengths as an individual.”

Burke and Williams see the scholarship as a symbol of their hard work and something that will help provide other opportunities and experiences in their futures.

“Receiving this scholarship to me sets an example that the instructors held me at a higher standard, they wanted to give me the opportunity not only better myself but to showcase what happens when you put in the work and the time outside of what you learn on-site.”

Dueling Arts International will host a summer workshop at Southeast from June 28 to July 12, and July 14 to 25.