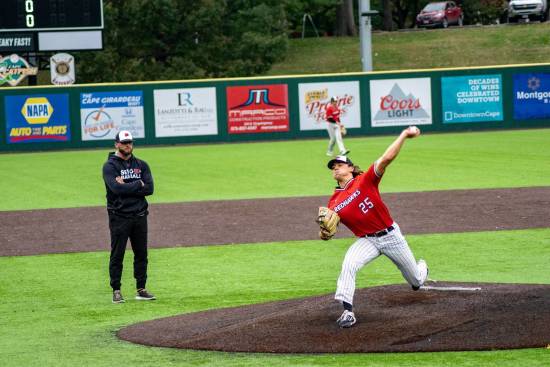 With baseball season starting in less than a month, the Redhawks look to start off the season with a win against the University of Louisiana-Monroe on Feb. 14. Last season, Southeast finished with a record of 23-32 overall and 10-20 in the Ohio Valley Conference.

Southeast coach Andy Sawyers has a positive outlook going into the new season.

“I feel like it’s going to be a much different offense from last year from a physicality standpoint,” Sawyers said.

The team has several returning starters including shortstop Tyler Wilber, who led the team last year with a batting average of .383. That season-long performance helped earn him a spot on 3rd team preseason All-American team.

“We’ve got some good leadership from some older guys coming back,” Wilber said.

Wilber also led the team in hits with 80 and slugging percentage at .531. Wilber also earned All-OVC Honors last year along with senior pitcher Noah Niznik. Niznik had a team-best 3.63 ERA last year in 62 innings pitched, giving him a record of 3-4.

“Guys have gotten older and a little more mature. We also have a little bit deeper of a staff this year and lots of positives with players coming back,” Wilber said.

The Redhawks are joined by sophomore Bryan McNeely, who pitched this summer for the Prospect League’s Cape Catfish and earned himself Starting Pitcher of the Year with a 2.39 ERA and a 6-1 record in 9 games played. McNeely feels as though he gained vital experience from the Catfish this summer.

“It gave me the experience that I wasn’t able to get at SEMO for my first year,” McNeely said.

McNeely went from 24 innings pitched last spring for the Redhawks to 70 this summer for the Catfish. McNeely was named a Prospect League West All-Star along with sophomore catcher Andrew Keck.

Looking back on last season, McNeely feels as though there are things upon which the team improved on.

“I think we are more of a team this year. We work better together and we are able to criticize each other more, which is pretty big, and coach each other more overall,” McNeely said.

The team will start with its first four games away versus the University of Louisiana-Monroe and the University of Kentucky and will have their first home game against Northern Illinois at 3 p.m Feb. 3 at Capaha Park.