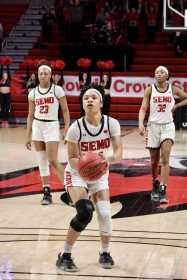 Junior guard Tesia Thompson shoots a free throw against Jacksonville State on Feb. 6 at the Show Me Center.
Photo by Ramond Buck

The Redhawks women’s basketball team extended its winning streak to eight games after defeating the Jacksonville State Gamecocks 79-52 on Feb. 6 at the Show Me Center.

The Gamecocks started out with the first two points on the scoreboard, but the Redhawks took the lead early and never fell behind after that.

Southeast’s early rebounding and defense allowed them to capitalize. The redhawks pulled in 11 rebounds in the first quarter en route to a 37-27 halftime lead.

Redshirt-senior guard Carrie Shephard led the team with 23 points. Shephard sunk 70 3-pointers this season, three away from her own program record of 73. Shephard also had four steals against the Gamecocks, bringing her season total to a conference-high 53.

“It takes everybody, every night, giving everything we have,” Shepard said. “If we work hard, tough and together, everything will take care of itself. SEMO way all day.”

Shephard credited the win to defense and rebounding. The team totaled 46 rebounds and ten steals. The Gamecocks ended the game with 31 rebounds.

“One thing we talked about before the game was to be the tougher and scrappier team,” Shephard said. “We are taught to hustle for a play and take it one game at a time.”

Southeast coach Rekha Patterson spoke about the eight-game winning streak and the return of senior guard Jessie Harshberger from an injury that caused her to sit out two games.

“It doesn't feel like we’re on an eight-game winning streak because we are not there yet, we are not the team to beat,” Patterson said. “Our focus is 1-0, we’re playing in the moment, taking it game by game. We’re already back to 1-0, moving forward to play Saturday.”

Harshberger returned to play 17 minutes and finished with 11 points, and led the team in rebounds with 8. Harshberger said she’s physically limited, but the coaches are being patient and giving her the time she needs.

“This team is capable of so much, we have so much potential but there is room for a lot of improvements,” Harshberger said. “Becoming OVC champs is a realistic goal at this point. We just have to focus and be humble.”

“Jessie’s energy and willingness to defend is what the team needs. She is exactly what you want a four-year player to be,” Patterson said.

The Redhawks are now second in the Ohio Valley Conference behind Belmont. They will return to the Show Me Center on Saturday, Feb. 8, at 2 p.m. to host Tennessee Tech.